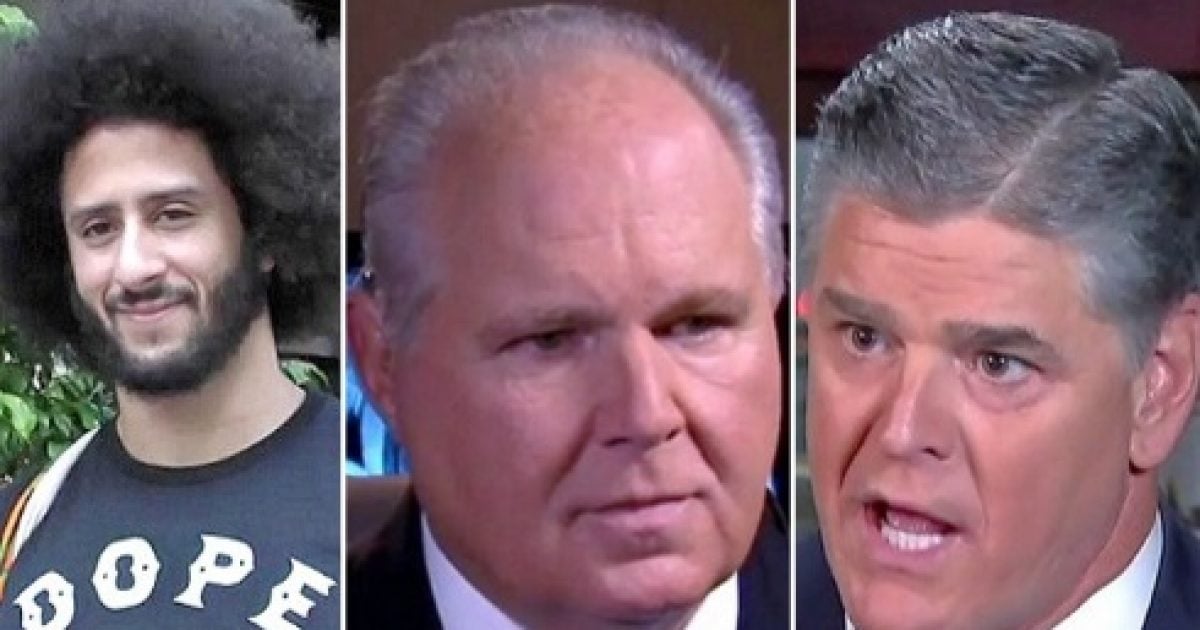 Limbaugh made the comments to Fox News anchor Sean Hannity, where he said fans are fed up with clueless celebrities inserting leftist propaganda into escapist entertainment like football.

Let’s be clear: No one is saying NFL players don’t have a right to protest, just that the football field is an inappropriate venue for it. There’s a time and a place for everything. Get it?

Rush, a lifelong football fan, said he didn’t watch last weekend’s slate of NFL games because he was disgusted at whiny millionaires trying turn a simple game into a political protest.

Like other annoyed fans, Limbaugh has vowed to boycott the NFL until players stop disrespecting the national anthem. “I’m going to be playing golf on Sundays now,” Rush said.

Limbaugh said the NFL is out of its mind if it thinks these protests will help viewership (remember, that’s ultimately the name of the game: ratings and revenue).

It’s an inconvenient fact for the left, but the majority of NFL fans are right-leaning men. From a marketing perspective, it’s suicidal for the league to alienate its core fans by injecting left-wing propaganda into an arena that’s supposed to be devoid of politics.

Limbaugh believes the left’s attacks on the NFL through its idiotic protesting of the national anthem goes deeper. Rush thinks the NFL — like the mainstream media and left-wing universities — are attacking masculinity itself. This may sound a little far-fetched, but hear him out.

“What does the NFL stand for?” Limbaugh asked. “Masculinity, strength, toughness. So what are they [the left] doing to it? You go to college campuses now, and you’ll find classes on how to take masculinity out of men … All the things that the left wants to erase from this country. They don’t like displays of patriotism, strength, rugged individualism. And that’s why I think the players are being used here.”

Similarly, both men and women admire femininity and beauty in women. Just look at the $454 billion beauty industry and the covers of countless fashion magazines.

Limbaugh says the NFL will soon find out that pandering to liberals will only hurt its business. Ultimately, the free market (i.e., fans/viewers/consumers) will determine whether these silly protests will continue.

“They think they’re relating to the majority of their fan base [with the protests], but they’re not,” he said. “They’re driving them away.”

Exhibit A: One major clothing company has already pulled its ads from NFL games. And Exhibit B: Eight restaurants have banned NFL games from their eateries.

Unemployed quarterback Colin Kaepernick — a vocal Black Lives Matter supporter — launched the anti-American protests in 2016 by refusing to stand for the national anthem.

He claimed he did it to protest police brutality against black men. But Kaepernick did nothing when blacks were killed by cops (both black and white) during Barack Obama‘s 8-year presidency.

Meanwhile, Kaepernick doesn’t even bother to vote, and says nothing about the countless black-on-black murders that occur every day across the United States.

Why does Kaepernick and Black Lives Matter not protest these senseless murders? Do black lives (not) matter when other blacks take them?