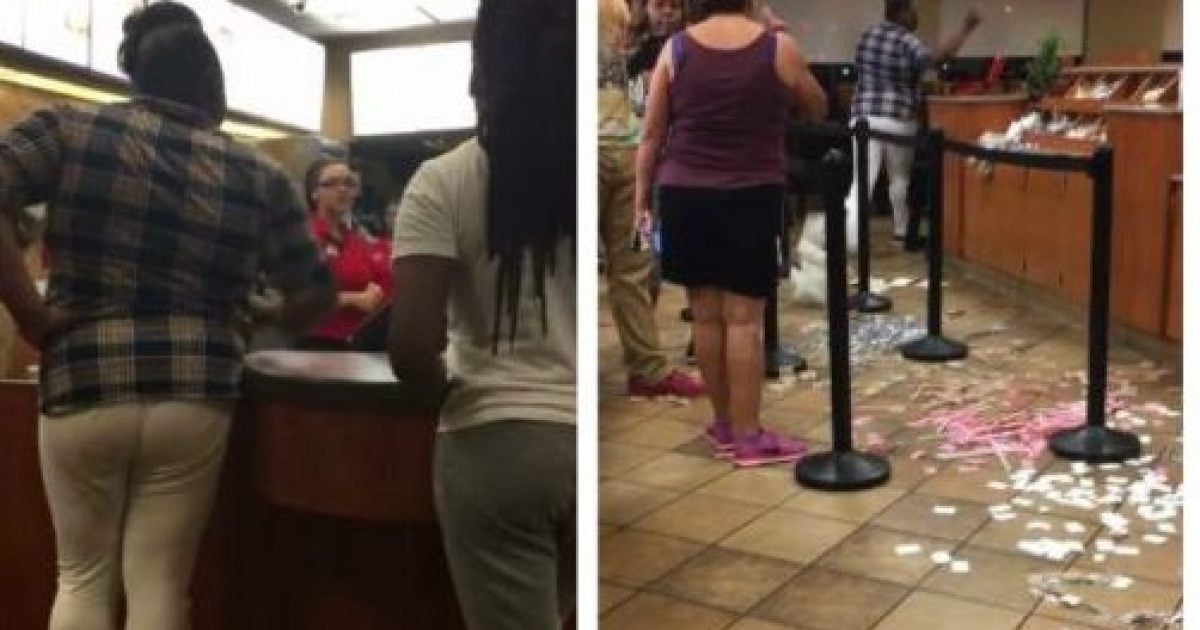 A simple case of supposed cold chicken nuggets led to a meltdown by a pair of customers who trashed a Florida Chick-fil-A restaurant.

Video captured by a witness to the scene showed two women arguing with restaurant staff at a Chick-fil-A in the River City neighborhood of Jacksonville. The video and description of the incident was posted by customer Allison Music on her Facebook page.

Music wrote that while she was waiting for her order at Chick-fil-A, a teenage boy was arguing about his order with the staff “for a good 15 or 20 mins.”

A few minutes later, two women tried to enter the restaurant through doors that had already been locked.

“These females beat on the door trying to bust the glass and pull and jiggle the door handle till the door handle literally breaks off the door,” Music explained. Unable to gain entry through the locked doors, the women proceeded to enter by another, unlocked, door.

Music then told how the women began “yelling and arguing” with the staff, who were already on the phone with police.

Though Music did not explain what the women were arguing about, the video footage seemed to indicate they were trying to get a refund for their brother because the chicken nuggets he received were cold. One employee told the women the brother had already received a full cash refund.

Apparently unsatisfied, one of the women is seen in the video knocking condiments, straws and napkins to the ground as an onlooker is heard calling her a “heifer.” Something is also thrown across the store, presumably by one of the women who was out of the video frame.

“I don’t know who raised these girls but this isn’t getting you anywhere in life,” Music wrote on Facebook. “This is very disrespectful on so many levels and any parent should be ashamed to raise children to act this way,”

Music also noted that there were children present at the restaurant who were crying because the incident frightened them.

She gave “kudos to Chick-fil-A for handling this situation in a very reasonable manner.”

Music concluded her post with a direct message to the disruptive women.

“You handled this situation the sorriest way a person could handle it. You are rude, you are a narcissist, and you shouldn’t be proud of what you did,” she wrote. “The only thing you accomplished was making a scene. Other than that you accomplished nothing.”

“Patrons” does not accurately describe these winners

Both ought to be arrested for vandalism and destruction of property. My guess is it won’t be the first time.

The worst garbage possible always shows its true colors yet somehow it’s always the business fault. Don’t serve them or let them in.

That is pathetic! I’m glad Chick-fil-A handled the problem in the most reasonable way possible. Those patrons should have been arrested.

Their brother had gotten cold chicken,was refunded his money.The sisters went back just to be internet stars. Horrible people.

Can’t blame them for trying to make the place feel more like home.

That’s alot of drama over nuggets. It’s sad that they have so little in life that nuggets are such a huge deal.