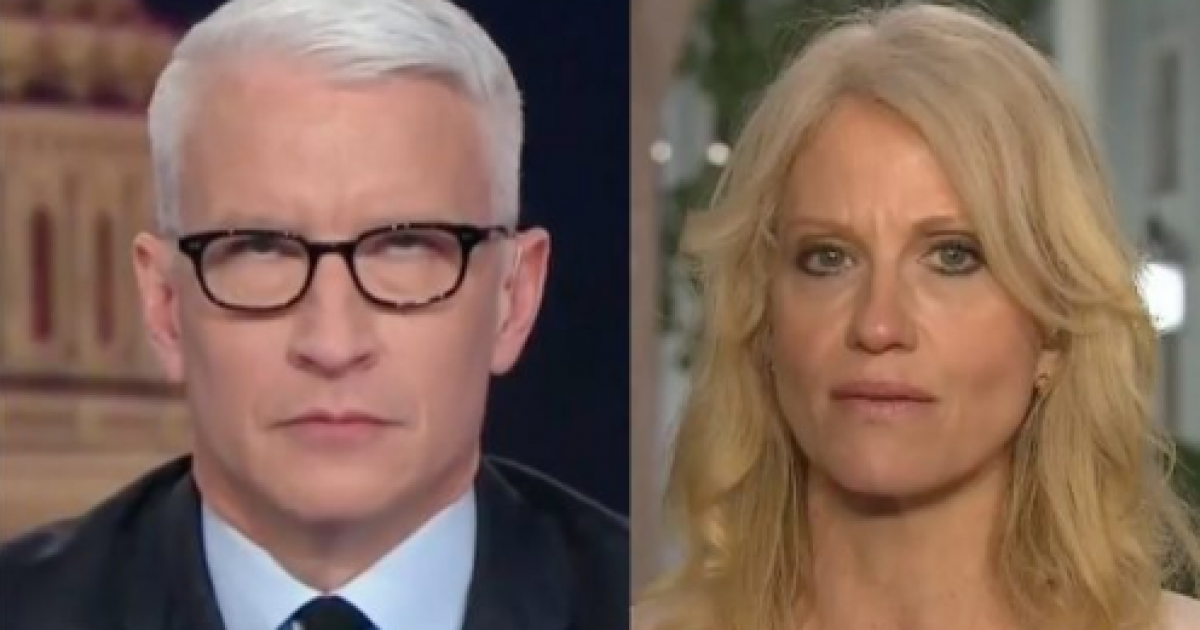 CNN’s Anderson Cooper is deservedly being raked over the coals for what many saw as his unprofessional treatment of Kellyanne Conway.

During an interview with the White House counselor on Tuesday’s “Anderson Cooper 360,” the CNN anchor visibly rolled his eyes as Conway defended President Trump in the wake of his firing of FBI Director James Comey.

Anderson Cooper’s eyeroll is all of us right nowhttps://t.co/gM8iokoUqEpic.twitter.com/J9hyCkRfaI

The hosts of Fox News’ “Outnumbered” blasted the mainstream media’s meltdown over Comey’s termination and ripped Cooper’s “disrespectful” behavior. The eyeroll comes in about the 45 second mark.

“He rolled his eyes so hard, he actually sprained his face,” co-host Kennedy said on Wednesday’s show.

“You may not agree with this. You may think this is a little controversial. I myself have some questions. But you have to have respect for the surrogates who are representing our president and our White House. And when you do this, Anderson Cooper and Morning Joe, you make us all look bad,” McCain said.

“I just don’t think it’s a good look for Anderson as a journalist to be rolling his eyes at anybody,” co-host Harris Faulkner added, “but let alone a woman who’s doing a job for the first time of any administration and the role that she played so close to the president. I just don’t think that’s a good side-by-side look for you, Anderson.”

.@HeyTammyBruce calls out Anderson Cooper for eyeroll at Kellyanne Conway: “He just reduced himself to being a child” pic.twitter.com/XQYvy5dXDp

“He just reduced himself to being a child,” she told “Fox & Friends” host Steve Doocy on Thursday. “If it was a man, I would tell you, he would not have used that same gesture.”

Others quickly joined the backlash, calling out Cooper’s biased behavior.

. @andersoncooper after watching ur unprofessional behavior as an #anchor as u interviewed @KellyannePolls my respect 4Uwent out the window! pic.twitter.com/ezQDHqdB0C

Thank you, @andersoncooper for being professional and unbiased.

Anderson Cooper:see eye DR immediately! Ur eyes rolling back during intvu of WH official-no REAL journalist would roll eyes; much be medical

And while plenty of Twitter users unleashed on Cooper, it seems that eyeroll just gifted him with a meme that will probably make the rounds on social media for a long time to come.

This gif of Anderson Cooper while interviewing Kellyanne Conway might be my favorite thing on Twitter today. pic.twitter.com/esrEszKwZ4

@EEEHSE @DrEstella @andersoncooper @KellyannePolls He only proved just that. He is a SPOILED BRAT!, HE NEEDS TO GROW UP TEMPER TANTRUMS ARE NEXT. He made a disgrace of himself and CNN AGAIN

@DrEstella @andersoncooper @KellyannePolls Ridiculous display of childish behavior Anderson! Lol ..this really helps your falling ratings CNN. Your at the bottom getting lower!

@DrEstella @immigrant4trump @andersoncooper @KellyannePolls If that was Tucker eyerolling at Maxine Waters the Democrats would have already created a new word for it. Something akin to “mansplaining”

@CNNMoney Are you proud of that? Should a journalist be rolling his eyes at an interviewee even if he does not agree? That was unprofessional @AC360

@DrEstella @andersoncooper @KellyannePolls My respect for Anderson Cooper went out the window years ago.
He is a vicious little snot pretending to be an anchor!
??Mocking a good woman

@DrEstella @andersoncooper @KellyannePolls The irony is that earlier in the interview Anderson had accused POTUS of behaving like a fifth grader. ? pic.twitter.com/OgFcy9NLrC

@CNNMoney This is shameful—tells you where @CNN stands!

@CNNMoney The eye roll of @AC360 is ignorant, sexist and demeaning. It also displays fully why #anderson and @CNN are called #fakenews. #GrowUp