The king of an anti-establishment punk generation came to the defense of President Donald Trump and said the two could possibly even be friends.

“There’s a complicated fellow,” the 61 year-old rocker said on “Good Morning Britain” Monday. “As one journalist once said to me, is he the political Sex Pistol?”

Born in London, England, Lydon now holds American citizenship and was critical of the way the media has attempted to “smear” Trump.

“What I dislike is the left-wing media in America are trying to smear the bloke as a racist and that’s completely not true,” he said.

“There’s many, many problems with him as a human being but he’s not that and there just might be a chance something good will come out of that situation because he terrifies politicians,” he said, adding that “This is joy to behold for me.”

Lydon agreed he might hit it off with Trump because the president shares the anti-establishment qualities of the Sex Pistols. 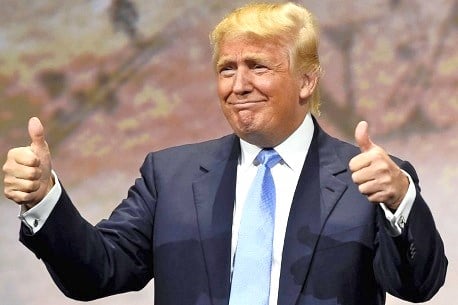 He also discussed his support for Brexit stating that “the working class have spoke and I’m one of them and I’m with them.”

Johnny Rotten and the Sex Pistols created a new movement of sorts in the music industry when they burst on the scene in 1975. With only one studio album in their initial short-lived run, they sparked punk music in the U.K. and eventually inspired many other musicians with songs like “Anarchy in the U.K.”, and “God Save the Queen.”

Their performances were marked with turbulence as they attacked social norms and slammed the establishment. Rotten left the Sex Pistols in 1978 and formed his own band, Public Image Ltd.