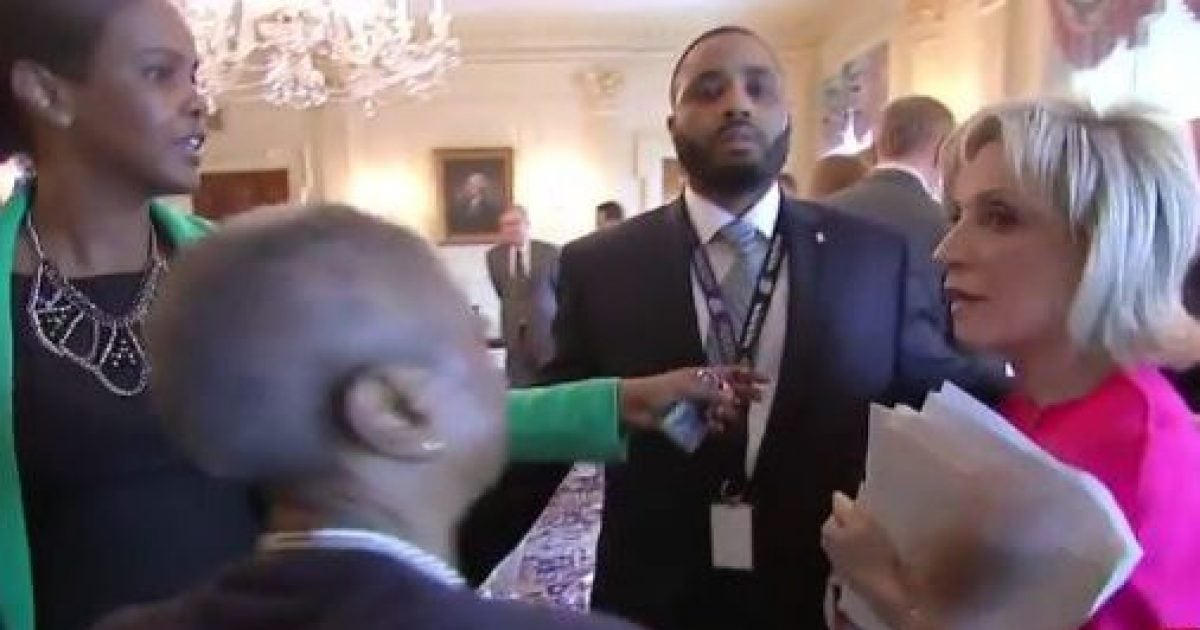 Mitchell played footage on MSNBC Tuesday showing her repeated efforts to get Tillerson, who has not held any press briefings since taking office, to answer a few questions.

WATCH: @mitchellreports escorted from room as she tries to question Sec. Tillerson, Ukraine FM on China and Russia. https://t.co/eF3Bawj17n

“That was only moments ago on the seventh floor of the State Department,” Mitchell said at the top of the broadcast after playing the video. “Still no answers from Secretary of State Rex Tillerson.”

The video showed Mitchell being directed out of the room along with other members of the press after a meeting between Tillerson and the Foreign Minister for Ukraine, Pavlo Klimkin.

“Mr. Secretary, China has said there will be consequences for the deployment now of anti-missile defenses in South Korea, can you respond?” Mitchell could be heard speaking as cameras flashed.

Staffers repeated “thank you” while ushering the press out of the room as the photo session ended.

She then turned to the Ukraine foreign minister, who did not respond either.

“Mister Minister are you sure the Trump administration will be strong against Vladimir Putin?” she asked. “Can you assure us that Russia will not be able to move any further into Ukraine?”

White House staff continued the push to exit, and one staffer could be heard saying “Press is departing the room, Andrea, Thank you.”

“We haven’t had any time in here,” Mitchell responded.

On air, Mitchell followed by stating that the State Department is “taking a backseat on national security and is now facing massive budget cuts.”

She explained that she would later attend the first State Department briefing since President Donald Trump was sworn in.

“An absence of public diplomacy not seen since 1953 when Dwight Eisenhower was president, when this tradition started of speaking out from the platform here at the State Department to the rest of the world,” Mitchell said.

Though some Twitter users applauded Mitchell’s valiant effort at journalism, many did not swallow her drama story and called her out for her obnoxious behavior.

@NBCNightlyNews @MeetThePress @mitchellreports Drama queen… all press was escorted out.

@NBCNightlyNews @mitchellreports I wonder if the press was told it would be photos only. I didn’t hear anyone else yelling. Are you trying to make a story out of nothing?

@BitsQuick @NBCNightlyNews @mitchellreports // MSNBC is not the press… They are partisan liberal operatives.

@laura_thoman @NBCNightlyNews @mitchellreports that is what happened but yet again the LIBERAL press having no respect for this office.

@NBCNightlyNews @TODAYshow @mitchellreports @MSNBC STOP making something from nothing for ratings. The interview time was OVER.

@ChristieC733 she is her only fan

@colinjones @AndrewLSeidel @mitchellreports Just perhaps, it was a photo op and they weren’t taking questions. This happened under Obama too

@kylegriffin1 @mitchellreports Andrea Mitchell is a Democrat hack posing as a journalist.

@NBCNightlyNews @mitchellreports You were escorted out for your unruly behavior. It was a photo op not a press conference.