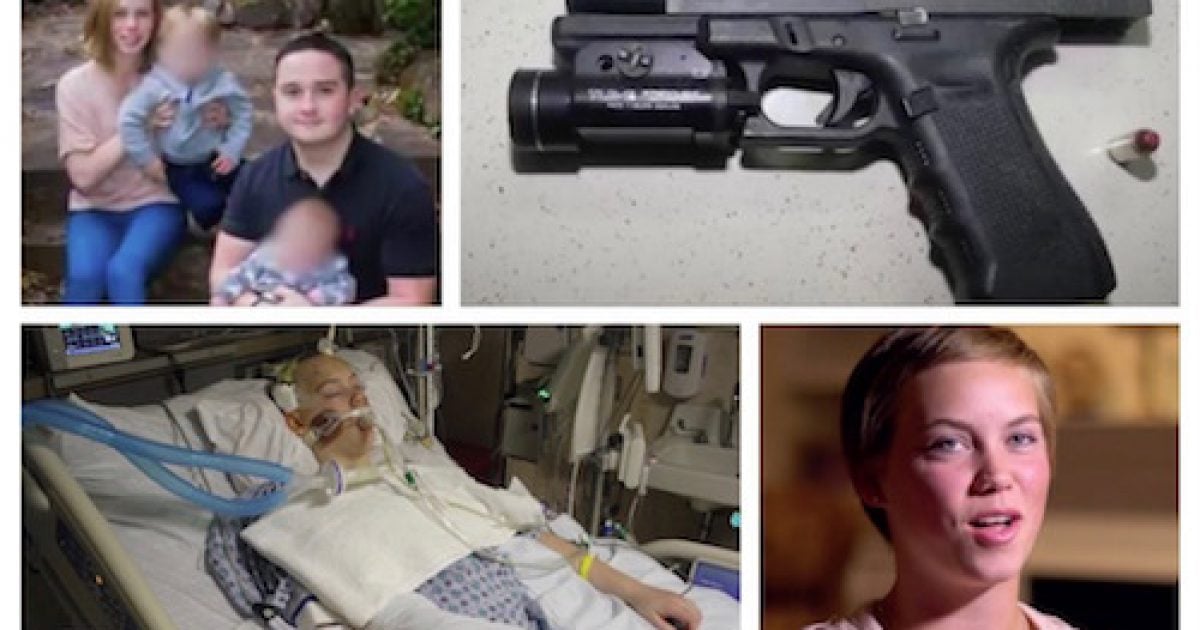 Gripping police body camera footage captured the moment a Georgia cop’s wife was found clinging to life while lying in a poll of blood from a gunshot to the head.

And the victim is now fighting allegations that she had attempted to take her own life.

Jessica Boynton, 19, is the wife of her high school sweetheart, Griffin Police Officer Matthew Boynton, 20, and the mother of two young boys.

Early police reports indicated that the young mother was the victim of a failed suicide attempt. After she miraculously regained consciousness, however, she had a completely different story to tell, according to Atlanta NBC affiliate 11Alive News.

Ben Stein rips into CNN while on CNN! It’s ‘what they did to Nixon’ – stop using Trump as a punching bag

The shooting occurred on a Thursday, April 14 of last year, when officer Boynton said he left the residence he shared with Jessica, to enjoy a late night meal with his co-worker and best friend, Officer Joshua Guthrie.

He also said that he’d left his service pistol at home in its holster inside the locked closet where Jessica was later found barely alive.

Officers were called to the Boynton residence in response to this 911 call from Matthew.

Matthew claimed that his wife had sent him a texted suicide message. It said:

I can’t do this anymore. Take care of Tollin and Tyler Please tell them I love them everyday. I have been suffering for a while now and no one has noticed. Here lately I have not been able to recognize the person I see in the mirror. This is not the first time I have had suicide thoughts. I love you and the boys.”

However, the text sent from Jessica’s unlocked phone wasn’t the only one Matthew got that night. He also exchanged numerous messages with a female county police dispatcher — who Jessica alleges is his mistress.

Shortly after receiving the suicide message from his wife, he sent an unrelated message to his girlfriend that said, “Ha ha, I’m sorry. I didn’t think about that, lol.”

After making the 911 call, Matthew raced home where he arrived before the responding officers. Using a handheld police radio, he called and said he thought he’d heard two gunshots.

“I believe I just heard a shot fired coming from my residence. I just came up the stairs, two rounds… be advised I smell gun smoke, and I can’t get an answer at the door,” he told the dispatcher, who instructed Matthew to remain outside and wait for the officers.

The following clips of raw body cam footage shows officers’ arrival, and their discovery of Jessica.

After Jessica awoke from her coma three weeks later, she said her alleged suicide had to have been staged.

Her last memory before the shooting was the discovery of a composition notebook lying in the closet out in the open — one which she normally kept hidden under a pile of clothing.

The journal included detailed notes about her plans to divorce her husband. She also noticed some of the pages were removed before everything went black for her.

The body camera footage taken from the responding officers depicts them breaking through the locked closet door to discover Jessica, lying with her head on a pillow and Matthew’s service revolver under her body.

“She’s still breathing,” one of the officers is heard saying.

She told agents with the Georgia Bureau of Investigation that she doubted that her husband could have had anything to do with it.

“It’s possible, but I mean it’s very doubtful, because he’s never hurt me before,” she told the investigator at the time. :I mean he might have grabbed my arm before, but I don’t think he would intentionally do anything to hurt me.”

A year later she’s having second-thoughts about her husband, is still fighting the suicide claim on her Facebook page, Justice for Jessica.

“Hard to believe someone shot them self when everything in my life was just beginning to seem right,” she posted. “We were filing for divorce and I had a job orientation that Friday.”

Matthew’s grandfather is the county sheriff.