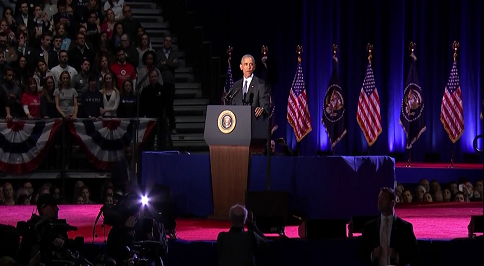 “Our children won’t have time to debate the existence of climate change. They’ll be busy dealing with its effects,” Obama said in his Chicago speech.

Obama said  that to “deny the problem not only betrays future generations, it betrays the essential spirit of this country,” clearly taking aim at the incoming Trump administration.

Obama’s farewell speech not only highlighted his presidential legacy, but gave his thoughts on major problems still facing the country — from race relations to economic inequality to global warming.

He also claimed Americans won’t be able to solve problems “without some common baseline of facts.” Obama was probably referring to liberal complaints of “fake news” propelling Trump to victory in November.