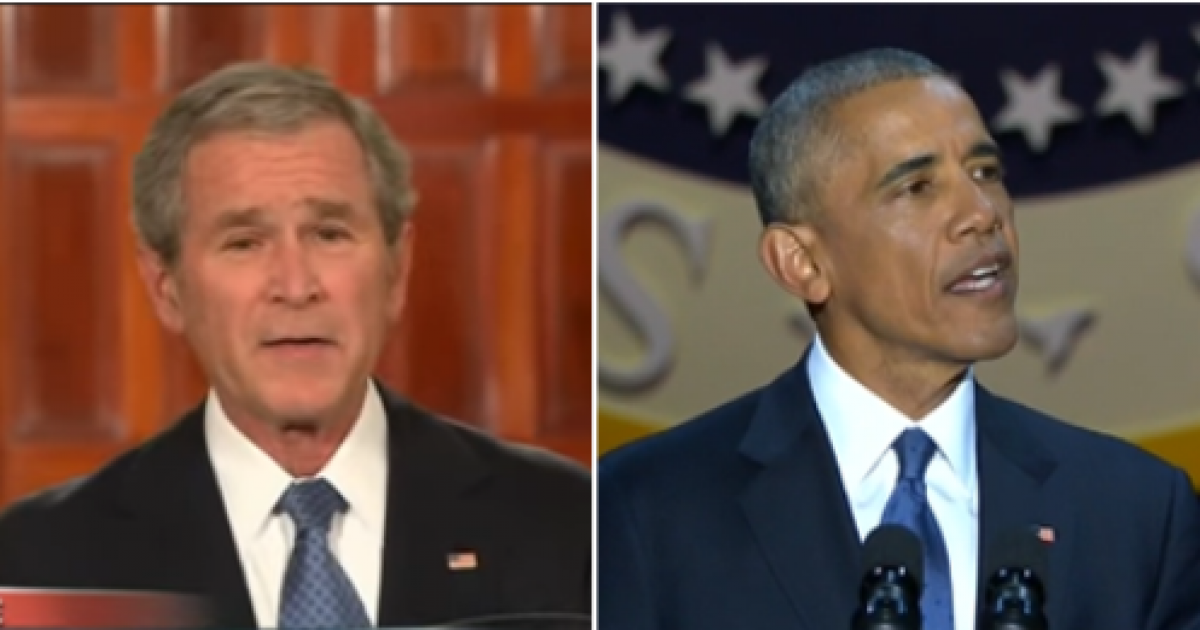 On Tuesday night, President Obama gave his farewell address to the American people from his adopted hometown of Chicago, almost in view of the place where, between gigantic Greek-style columns, he gave his acceptance speech over eight years ago.

He referred to himself 75 times, according to The Daily Caller’s review of his prepared transcript.

The speech was soaring, eloquent, even touching – if contrived – in some places, but it was also a speech that could have been given at any point during Obama’s presidency, such was the myopic nature of these same, oft-repeated tired liberal talking points dressed up with beautiful rhetoric, like lipstick on a pig.

When the rubber meets the road, the outgoing president used his farewell speech to cite his “accomplishments,” rally his base, and double down on policies and beliefs that, while some may actually sound good to many, are entirely unworkable.

Eight years ago, someone else gave a farewell address. This writer is no fan of many of George W. Bush’s policies (particularly trade, immigration, and foreign interventions), nor of the way they impacted the severe losses his own party suffered starting in 2006 (just like Obama), but none of that takes away from what a class act our former president was as a person, nor the stark differences between both farewell speeches.

President Bush spoke for less than 14 minutes. President Obama went over triple that. This wasn’t entirely unexpected, of course, given the way the man likes to hear himself talk. Put it this way, if he were your preacher you’d probably be looking for another church because you’d never beat the crowd to Golden Corral!

The contrast between Obama and Bush couldn’t have been more striking, both in policy and personality. Yet, Bush found it in himself to be gracious to the incoming president. “Standing on the steps of the Capitol will be a man whose history reflects the enduring promise of our land,” Bush said. “This is a moment of hope and pride for our whole nation. And I join all Americans in offering best wishes to President-elect Obama, his wife Michelle, and their two beautiful girls.”

For incoming President Trump from President Obama, nothing of the sort, other than the promise of a “smooth transition” and plenty of veiled attacks on Trump’s policy positions. No best wishes, no acknowledgment of family, no sort of optimism whatsoever that Trump just might do something right.

Just a few years removed from the horror of 9/11, President Bush knew the dangers posed by Islamic extremism, and wasn’t afraid to call them “fanatics” who demand “total obedience to an oppressive ideology, condemns women to subservience, and marks unbelievers for murder.”

President Obama seemed more concerned with global warming and the fact that many Americans aren’t keen on filling our country with Muslim refugees than he is with actual Islamic extremism around the world, or protecting us from it.

President Bush took a significant chunk of his 14 minutes to focus on others, specifically several people that he had brought to the White House for the occasion. A gold-star father who joined the Navy Medical Corps at 60 to honor his fallen son, a principal who opened a charter school, a former prisoner who leads a faith-based program to help former inmates return to society. These people weren’t there to highlight anything specific Bush had done to help their cause, but only to serve as “examples of America’s character.”

For his part, President Obama focused on himself and his legacy, and all the “threats to democracy” that will manifest themselves if the good guys don’t stop Trump and his minions, or something. OK, it was more veiled than that, but if you watched the speech you get the picture.

His party had just suffered a bone-crushing defeat, and yet President Bush expressed his optimism for the future of America.

“President Thomas Jefferson once wrote, ‘I like the dreams of the future better than the history of the past.’ As I leave the house he occupied two centuries ago, I share that optimism. America is a young country, full of vitality, constantly growing and renewing itself. And even in the toughest times, we lift our eyes to the broad horizon ahead.”

Other than explaining how all the “threats to democracy” are going to crush us, the only optimism President Obama expressed was the hope of future Democratic victory because young liberal youth will “soon outnumber all of us, and I believe that as a result, the future is in good hands.”

You know, that permanent Democratic majority liberals have been crowing about.

While he did cite some of his accomplishments, President Bush didn’t take his last waltz on the national stage to race-bait, pander, rally his base, or attack his successor. Rather, he offered an optimistic vision for the road ahead.

Sadly, President Obama, having learned nothing from his party’s electoral disasters, including Hillary Clinton’s November defeat, remained a leftist ideologue to the end.

Thankfully, as a new one begins, his chapter in America’s story is quickly coming to a close.