Angry leftists slammed Donald Trump on Twitter as the president-elect kicked off his victory tour in Cincinnati, Ohio, Thursday night.

Actor Will Wheaton was triggered by Trump’s gleeful comment that he had a lot of fun campaigning, and the party is just getting started.

“[We had] a lot of fun fighting Hillary, didn’t we?” Trump asked the raucous cheering crowd.

He is an ass!! He won already! Leave Hillary alone!

Furious Clinton shills called Trump “shameless and graceless” for celebrating after negotiating to keep Carrier from firing 1,100 American workers by moving to Mexico.

Tonight's rally is a good reminder that at the end of the day, Donald Trump is just a bad person. Winning an election doesn't change that https://t.co/X7S19SKL92

Trump is touring Middle America to thank them for supporting him after mainstream media, Hollywood, Wall Street, his own party, and the billionaire donor class turned their backs on him.

During his speech in Ohio, Trump also slammed the “dishonest media” for repeatedly regurgitating that he “had no path to victory” while citing skewed, bogus polls like this one: 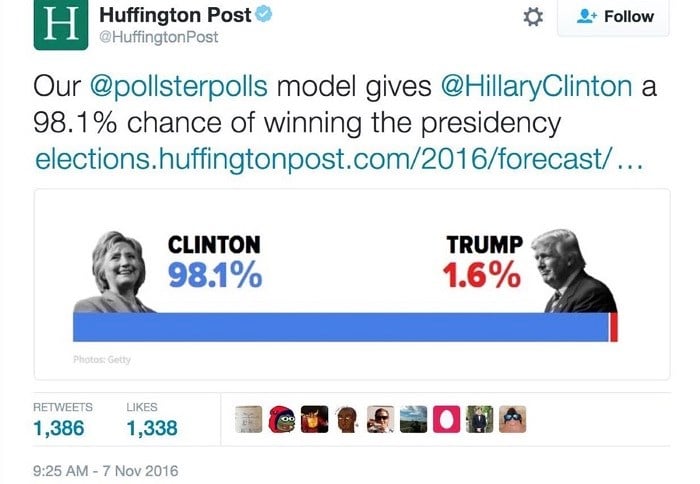 Trump reminded his supporters that like him, they were underdogs who had been written off by mainstream media.

Trump said his improbable victory underscores that anything is possible.

“This campaign proved that the old rules no longer apply, that anything we want for our country is now possible,” Trump said. “Now is not the time to downsize our dreams, but to set our sights higher than ever before for our country.”

Trump said his presidency will be a time for Americans to ascend to greater heights of achievement.

“The era of economic surrender is over,” he said. “We’re going to fight for every last American job.” “It’s time to remove the rust from the Rust Belt and usher in a new economic revolution.”

Trump reminded supporters that they helped him bust through the “Blue Wall” of longtime Democratic states like Wisconsin, Pennsylvania and Michigan.

“We didn’t break it. We shattered that sucker,” Trump said. “We shattered it, man. That poor wall is busted up. I’ll never forget it because it felt so good.”