Apparently, if you’re Donald Trump, you have to repeat the same things multiple times, and mainstream media still pretend you never said it.

The president-elect again disavowed the alt-right movement, saying he does not want the group’s support.

Trump also defended his senior adviser Steve Bannon against claims he is an anti-Semitic white nationalist.

“If I thought he was a racist or alt-right or any of the things, I wouldn’t even think about hiring him,” Trump said.

Trump made the comments a day after white nationalist Richard Spencer led a meeting of alt-right activists in Washington.

This weekend, Neo-Nazi Richard Spencer (who coined the term "alt-right") led the crowd at his conference in DC in a "Heil Trump" chant. pic.twitter.com/X1qX0l3uKI

Spencer and his group led the crowd in a “Heil Trump” chant.

Interestingly, the man who did the Nazi salute at the alt-right conference alongside Richard Spencer is Jewish.

While fringe elements like Spencer’s group have championed Trump, he and his surrogates have repeatedly disavowed the alt-right, noting that he can’t control who supports him.

Trump surrogates pointed out that Hillary Clinton and President Barack Obama are the heroes of many undesirable radical groups, including those who recently launched violent riots around the country, and the media do not repeatedly ask them to disavow those fringe elements.

Obama has even refused to condemn the rioters and suggested that they continue protesting. “I would not advise people who feel strongly or are concerned about some of the issues that have been raised over the course of the campaign … to be silent,” Obama said. 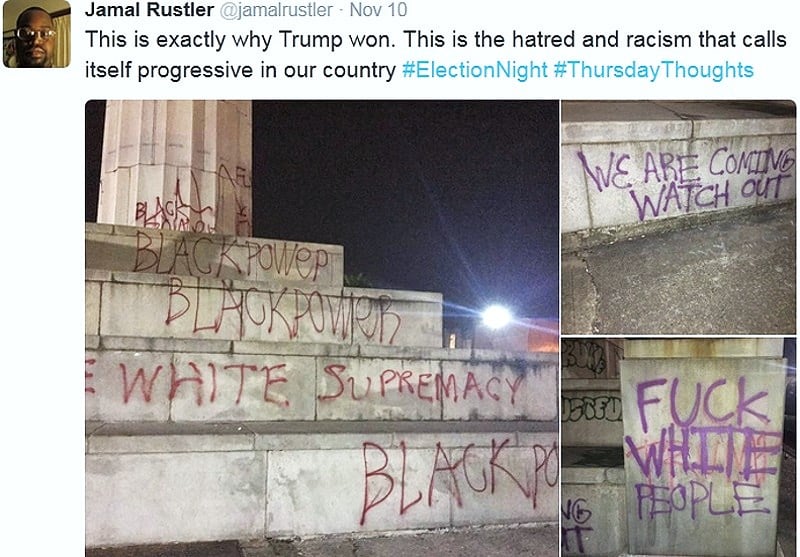 Former Breitbart chairman Steve Bannon has been painted by the mainstream media as an anti-Semite, but prominent Jewish leaders slammed these claims as totally false.

Morton Klein, president of the Zionist Organization of America, had nothing but praise for Bannon.

“Steve Bannon has a number of Orthodox Jews who wear yamakas all day long working for him,” Klein told Fox & Friends. “He has homosexuals working for him. This guy is the opposite of anti-Semite. He is a strong supporter of Israel.”

Trump’s trusted adviser and son-in-law, Jared Kushner, is Jewish. Trump’s daughter Ivanka converted to Judaism and is raising her three children as Jews.