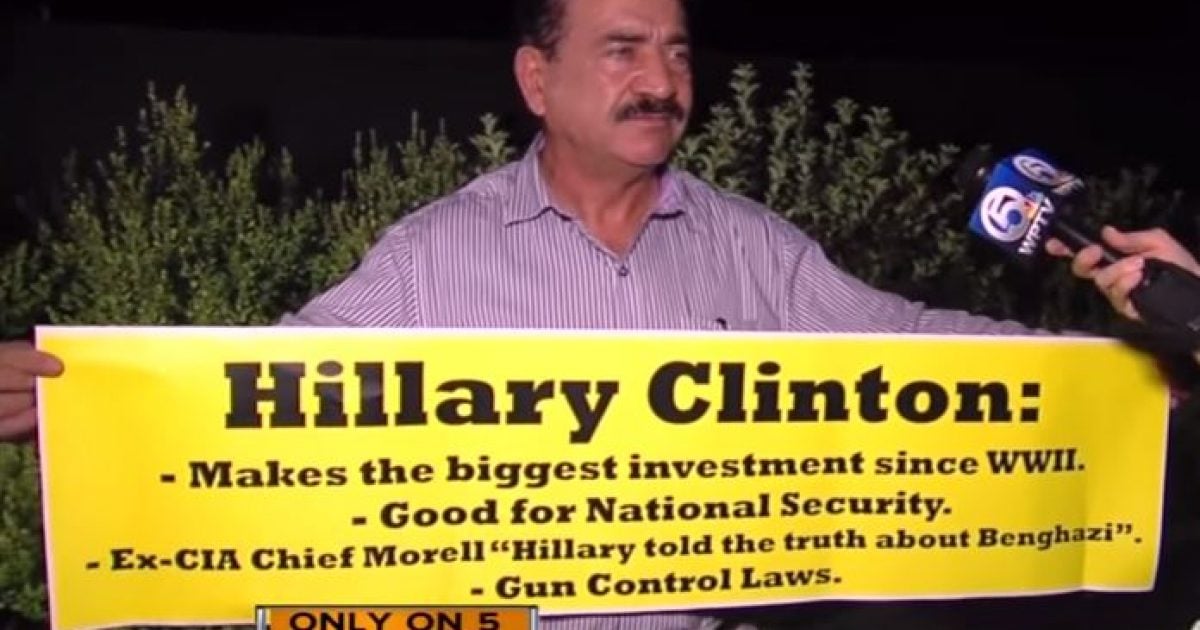 The father of Orlando shooter Omar Mateen made a surprising appearance Monday night at a Hillary Clinton rally in Kissimmee, Florida, after which he told a news crew that he strongly supports Clinton’s presidential campaign.

Seddique Mateen was spotted by chance by reporters with the WPTV news station from West Palm Beach, who saw him sitting just a few feet away from a speaking Clinton, who opened her remarks by commemorating the victims and first responders of the Pulse nightclub shooting.

Omar Mateen’s June killing spree at Pulse claimed 49 lives along with his own. Seddique attracted some negative attention after the shooting when he responded to it by saying it was God’s job, not his son’s, to punish the sin of homosexuality. Seddique was also revealed to have expressed support for the Taliban in Afghanistan.

But on Monday night, it was Clinton, not the Taliban, that Mateen wanted to show support for. Footage captured by WPTV shows him smiling, waving a small American flag, and recording the event with his smartphone. Initially, he rebuffed WPTV’s efforts to interview him, but he reconsidered during a chance encounter at a rest stop a short time later.

“Hillary Clinton is good for United States versus Donald Trump, who has no solutions,” Mateen told the news crew. Mateen said he had been invited to attend the rally, but this invitation appears to have been the product of his membership in the local Democratic Party rather than a deliberate choice by organizers.

Mateen told WPTV’s Tory Dunnan that he supported, in her words, “everything Clinton has to say, especially her gun control measures.”

He also showed off a personal sign he had made touting Clinton’s merits. The sign gave the following reasons, verbatim, for backing Clinton:

When WPTV asked why he was attending a rally in Kissimmee, which is just a few miles south of Orlando, he replied with an apparent non sequitur about his son.

“I spoke a lot about that, and I wish that my son joined the Army and fought ISIS, and destroyed ISIS, that would be much better,” he said. Mateen also appeared incredulous when Dunnan suggested people might be surprised to see him so close to Orlando.

“Why they should be surprised?” he said.” I love United States, and I’ve been living here for a long time.”

In the clips released by WPTV, Mateen appears to show little guilt or remorse over the Pulse shooting, and he rebuffs efforts to talk about it by saying he has cooperated with law enforcement. According to Dunnan, he attempted to redirect the conversation elsewhere whenever the topic was brought up.

When asked why he sat so close to Clinton, Mateen suggested it was no big deal.

“It’s a Democratic party, so everyone can join,” he said.