An anti-religion activist group is going after the Air Force Academy in a big way.

The oddly-named Military Religious Freedom Foundation, which advocates anything but religious freedom, is using a video, a billboard and even a plane flying overhead to get a message out to President Obama during his June 2 commencement address, according to Air Force Times.

The message reads, “Welcome Mr. President To Our AF Academy. Why is Jesus Commander In Chief Here?”

“Comedy and sarcasm is always a good way to get attention, but this is a little much. I think it raises a lot more questions than answers,” Kate Harris, who works close to the billboard, told local station KRDO Channel 13 News.

Mikey Weinstein, the founder the group trying to divest the military of anything religious, claims that religious fundamentalism is being pushed on the Academy’s cadets.

“We want people to be judged on their value, talent, patriotism and their character, not whether they accept Jesus Christ as their personal lord and savior,” he said. “When it comes to separating church and state, the Air Force Academy shows overt favoritism to one version of Christianity.”

But others don’t know what he’s talking about.

“You would think that you would hear about this from so many people long before this if it was that big of an issue. That specifically, Christianity is being forced on these students,” Harris told the station.

The billboard with its message to Obama will remain up until June 5, three days after graduation.

“We are watching everything the AFA does and it’s made no significance progress. It pains me to say it because I’m a graduate,” he added. New York Times could go dark for a day: Journalists threaten to walk if pay demands are not met

New York Times could go dark for a day: Journalists threaten to walk if pay demands are not met 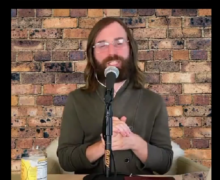