Protesters were out in full force Tuesday night during Milo Yiannopoulis’ “Most Dangerous Faggot Tour” stop at Rutgers University, which brought in about 450 students. 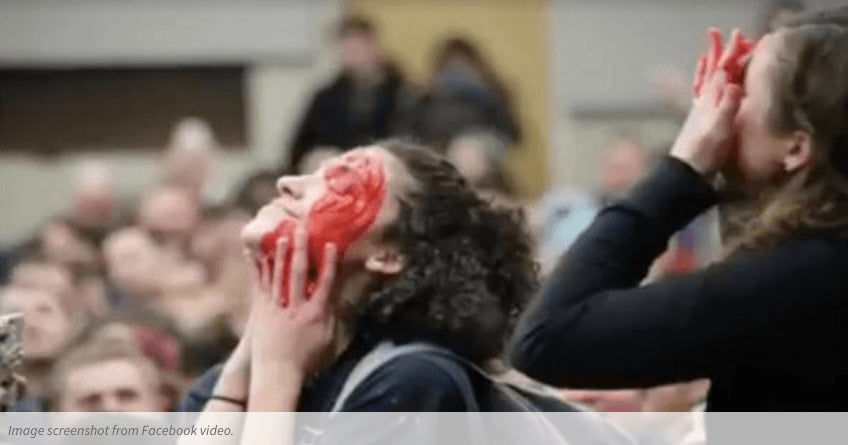 Student protesters, reportedly from the group RU Speak Out and other organizations, stood up in the middle of Milo’s speech after one protester screamed, “This man represents hatred!” and then started smearing fake blood all over themselves.

One student took a video of some of the protesters screaming, shaking their fists, and giving everyone the middle finger as they left the room, culminating with one of the last protesters to leave shoving her hand into the camera.

“[Rutgers groups] should not be inviting anyone like Yiannopoulos because what we stand for is inclusion and diversity,” student activist Nyuma Waggeh told The Daily Targum. “If a speaker makes someone feel unsafe or uncomfortable, then they should not come to campus.”

Student R. Theodora Appleton wrote a blog post about her experience at the event saying, “Never in a million years would I expect a gay white man to be so strongly against the progressive feminism wave and the Black Lives Matter movement.”

When Yiannopoulis told attendees at one point that we can all agree with Martin Luther King, angry protesters started yelling, “Milo doesn’t have the right to speak of MLK.”

After allowing them to chant for a little while, Yiannopoulis continued, explaining, “What I was saying is that we can agree that we should judge people on the content of their character, not their skin color.”

“I never knew people at Rutgers could be this disgusting,”one student remarked on Twitter in response to the event. “People that I have class with and share a campus with, hate me and my skin.”

“Or maybe it’s because you people kept interrupting the man that we were trying to hear speak,” another student contended in reply.

Before Yiannopoulis started speaking, Matthew Boyer, one of the event organizers, emphasized the Q&A portion of Yiannopoulos’ talk as a way for students to get involved in the debate.

“If you have a question, come and formulate them, don’t just shout them out,” Boyer said. “That’s such an easy way out of the debate.”

One student recapped the event on Facebook, saying that while Yiannopoulis was great, the audience ruined the night for him because the protesters would try to talk and shout over everyone else, causing him to miss many of the points Yiannopoulis was trying to get across.

“The strangest thing, however, was that when the floor was opened up for questions, I didn’t see any of the protesters behind me raise their hand,” the student continued. “Yiannopoulis and others were clearly open to hear the position of the left, and when someone with an opposing view DID have a question, it was respectfully answered with a libertarian perspective.”

“The purpose of university is to interrogate new ideas, discover ourselves, meet new people, and explore the world. What it ought to be is a free space without trigger warnings. In my view, anyone who asks for a trigger warning should be expelled. What they’ve demonstrated is that they are incapable of being exposed to new ideas,” Yiannopoulis said.

Parts one and two of Yiannopoulis’ speech can be found here and here.

Here is one video of the protesters: