FBI agents are now zeroing their investigation of the San Bernardo mass shooting on a former neighbor of the husband-wife terrorist team who methodically murdered 14 people Wednesday in the deadliest U.S. terror attack since 9/11.

Agents believe that Enrique Marquez, 29, the former neighbor, may have been a straw purchaser of the two long guns used by Syed Farook, 28, and his wife, Tashfeen Malik, 27, according to The Los Angeles Times.

The straw purchasing of weapons for another individual is a felony under federal law, punishable up to 10 years in prison.

Fox News reported that Marquez admitted himself into a Long Beach mental health facility shortly after Wednesday’s attack and has been unavailable for questioning.

FBI spokeswoman Laura Eimiller says agents served a federal search warrant at the house overnight. She declined to discuss what they were looking for or what was recovered.

Vincent Gonzales — who lives directly behind the raided house —  says the FBI used his backyard for the operation and also told him to stay indoors. 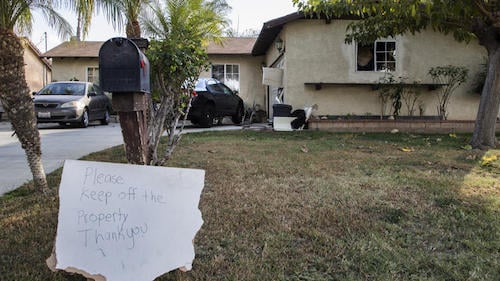 In a clear indication that the residents where the raid took place don’t want to talk to anyone, a sign was posted on the lawn indicating, “Please keep off the property. Thank you.”