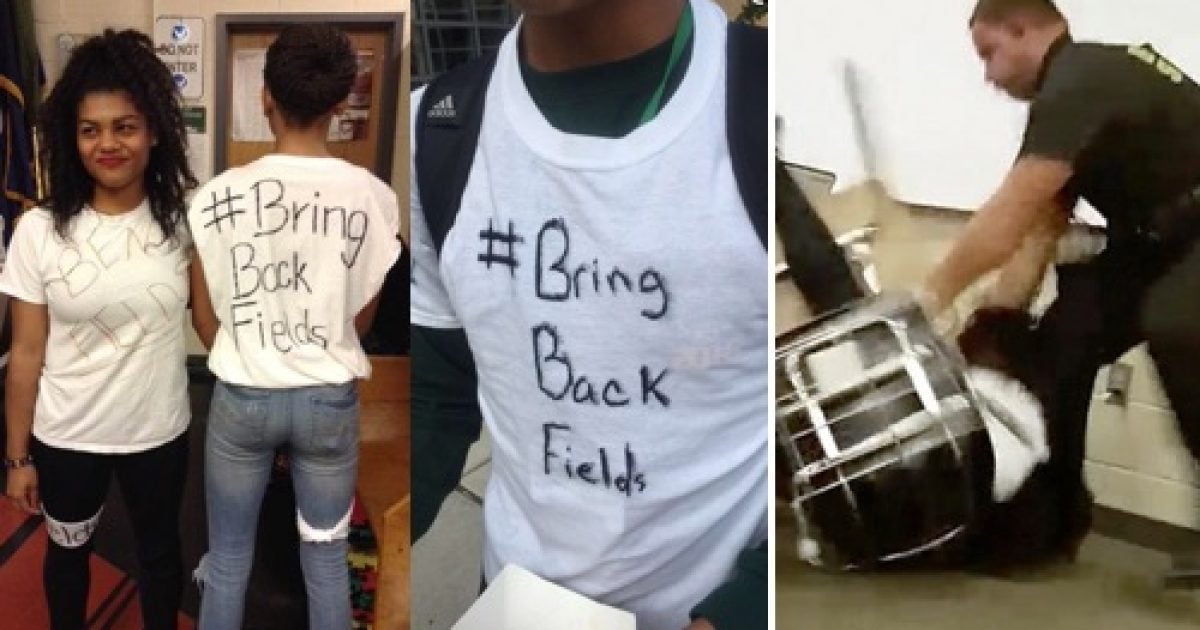 In a united show of support for fired deputy and school resource officer Ben Fields, students at Spring Valley High School walked out of their classrooms, some saying “Free Fields” or wearing T-shirts with the message “#BringBackFields”

At about 10 a.m. Friday, hundreds of students left their classes and walked into the school’s atrium, WIS-TV reported.

Fields was fired by Sheriff Leon Lott after a video of him dragging a teenage girl student from her desk went viral on social media, prompting outrage among liberals.  Even after an investigation turned up evidence that the student attacked the officer with her fists, the pressure to dismiss Fields was just too great.

But students who know Fields said they feel differently.   “FIELDS was the glue that kept everything together.” one student tweeted.

“He was a great guy,” student London Harrell said. “He protected us and everything. He was our school resource officer. We always could depend on him and everything. Every time I saw him, he was always joking around with people. It was never like ‘Oh, I’m about to body slam you.'”

After the walkout, principal Jeff Temoney told students that they would not be suspended if they returned to class. “We’ve heard your voices, okay,” he said. “We appreciate you taking time to do this, but again, as you know, we always focus on teaching and learning, so let’s head on back to class.”

The television station reported that the school district described walkout as “small” and “orderly.”

On Twitter, #BringBackFields is now trending.  Some think school and the authorities who so quickly fired Fields would do better listening to the people who knew him best instead of liberals and the media.

Liberals will make up all types of stories, but the truth will eventually come out. #BringBackFields #ThinBlueLine pic.twitter.com/IbbWapFAPs — Jack Cavanaugh (@Cavanaugh74) October 30, 2015

If you don’t go to Spring Valley, your comments about SV are irrelevant because you have no idea what our school is about #BringBackFields — kat (@katphemister) October 30, 2015

FIELDS was the glue that kept everything together. Now that he gone everything gonna fall apart #BringBackFields they ALREADY fighting again — Luke (@20k_luke) October 29, 2015