It looks as though the Black Lives Matter movement is getting totally out of control — and its adherents see nothing wrong with that.

A Georgia woman was arrested last week for posting threats against police officers and white people on social media.

The woman, Latausha Nedd, who goes by the name Eye Empress Sekhmet on her YouTube channel, made hate and profanity-filled videos calling for a war to be waged against whites, and advocating shooting police officers, according to WSB-TV 2 in Atlanta.

Nedd lives a mile-and-a-half from the local police station.

“I say let’s have a take a gun day, and start walking up on these untrained and stealing their weapons,” Nedd said.

“I never said that,” she answered.

Nedd is apparently a fan of the TV station.

“She was watching your news broadcast,” Chief Michael Register with the Clayton County Police Department told WSB-TV.  “A lot of people talk on the Internet and on YouTube, but most people don’t make threats against segments of the community.”

In court, the judge read of the charges and allegations against Nedd. She is charged with criminal solicitation and terroristic threats, both felonies.

Nedd was also charged with battery and cruelty to children. She was in a state of disbelief after hearing the two charges.

“Charges of battery and child cruelty? I don’t even have a child. I have no idea what you’re talking about,” Nedd said.

Those charges stem from an incident involving the daughter of a friend. She also denied making threats. The court denied bail at her arraignment.

Watch the report via WSB-TV 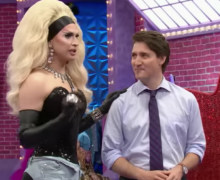