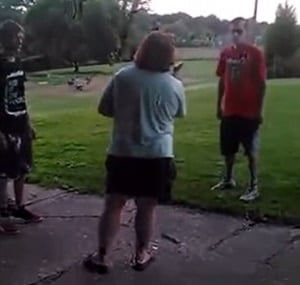 Bringing a gun to a fistfight is always a good idea, but this mom may have gone too far.

The mother of a 15-year-old boy pointed a gun at other teens she said were bullying her son at a local park last week, and it was all caught on video.

The confrontation took place in St. Charles, Missouri, at a local park in the St. Charles Hills subdivision.  Tracy Leeser told KMOV on Tuesday that she “never had any intention of firing that weapon,” yet she didn’t hesitate to pull the gun and aim it point-blank at several of the teens.

Tyrelle Ware, 15, recorded the encounter on his cell phone, which involved his brother Terrence, 18, and another 18-year-old, Jack Herren.

Leeser and her husband Don, both 42, arrived at the park to defend their son Brett after receiving a text from him asking for help.  Angry, she walked up to the first teen screaming and cursing at him to get away from her son.

After the teen threatened to “beat your son’s a** right now,” Leeser reached into her pocket and pulled out her pistol, aiming it at the boy’s chest, yelling “you wanna beat my a**?”  The teen can be heard saying, “come on, shoot me.”

Leeser and the teens continued to square off in each other’s faces, neither backing down.  One teen said, “You are in the wrong lady, you came here with a gun for 17-year-olds.”

“They were within a foot of me, threatening me and my family,” Leeser told the news station.  “I was scared to death.”

Ware said, “When she aimed the gun at me, I was kind of shocked.”

The families of the teens involved have spoken out.  Christina Halton, 40, mother of Tyrelle and Terrence, said she would love to see charges filed.  “If they don’t get charged, what kind of example are we setting for our children, that it’s OK to pull guns on kids?” she said.

“No, this is not how we deal with kids,” Halton said, according to the St. Louis Post-Dispatch.

Since the angry face-off, which could have turned deadly, tensions have remained high.  Over the weekend, someone fired up to a dozen BBs at the Leesers’ home, striking the front window while their 8-year-old daughter was asleep on the couch.  The Ware brothers and Herren denied being the shooters, and said they don’t know who did it, although local police are investigating.