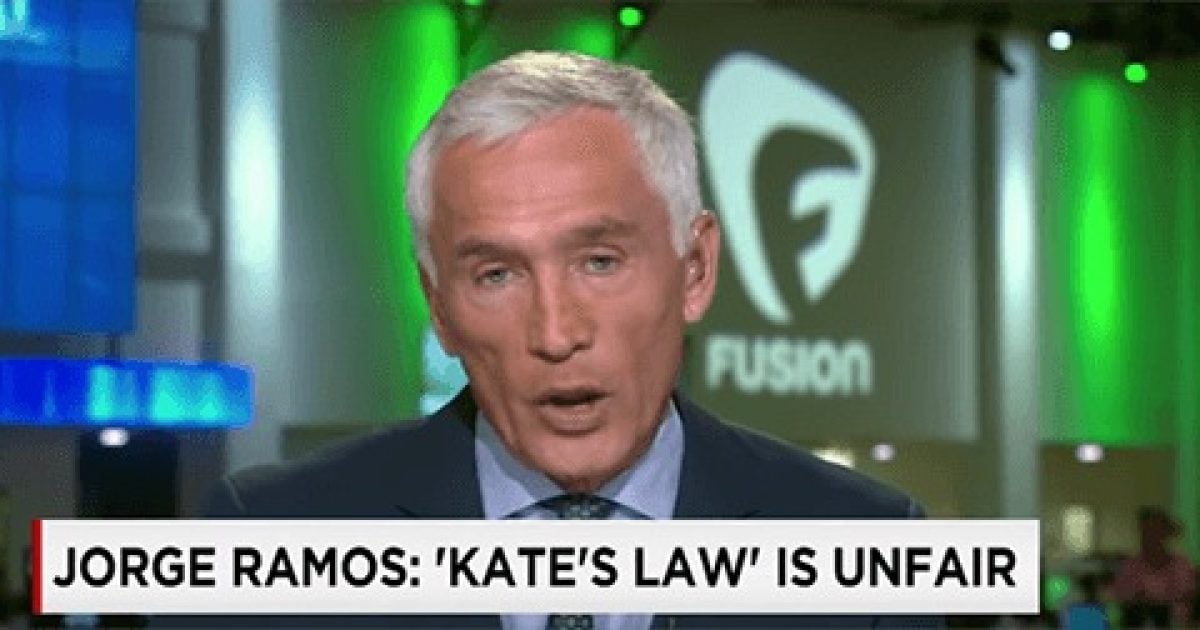 Social media users are furious that Jorge Ramos, the illegal immigration activist who masquerades as a journalist, came out against a law named in honor of a woman killed by an illegal alien who’d been deported from the country five times — and returned every time.

Speaking to CNN’s Brian Stelter in an interview to air Sunday on “Reliable Sources,” the Univision anchor declared Kate’s Law, which dictates that a deported illegal alien caught sneaking back in the country, would receive a mandatory five-year prison sentence, is unfair.

“I think it is unfair that because one undocumented immigrants killed a wonderful human being, that all immigrants are being blamed for that killing,” he said. “It is so unfair.”

Ramos is, as usual, confusing all immigrants with illegal immigrants.

“It is completely unfair to criticize millions of people for what one or two people have done,” he said.

Really? Yet when the push to wipe out the entire history of the South began because one evil white kid, Dylann Roof, who once held a Confederate battle flag in a picture, killed nine innocent black people in a Charleston church, Ramos didn’t offer a similar defense.

Television shows have been pulled off the air, major retailers have removed any product that contains the flag, statues are being removed and schools are being renamed all because of that one person’s actions.

Where are you on that Jorge?

Social media, meanwhile, was enraged by Ramos’s take on the law.

Bill O’Reilly says he wants to know if Jorge Ramos supports “Kate’s Law.” So I asked him: http://t.co/CE0c2HCBCO More on @CNNReliable Sunday

@brianstelter no one knows they can hide their past and blend in as good citizens of the u.s.a. So what r u talking about mr. Ramos

@brianstelter @CNNReliable because ass tart @jorgeramosnews is linking all immigrants to subject when truth is that it’s about illegals!!!!

@AIIAmericanGirI @SooperMexican there is nothing unfair to illegal squatters. Throw them all out of our country!

@irritatedwoman @MentonGini That advocate has an excuse fir everything. Every one of them is a criminal the second they sneak across.

@irritatedwoman how ridiculous this joker is. Unfair to illegals…them being here taking jobs and government services are unfair to me.