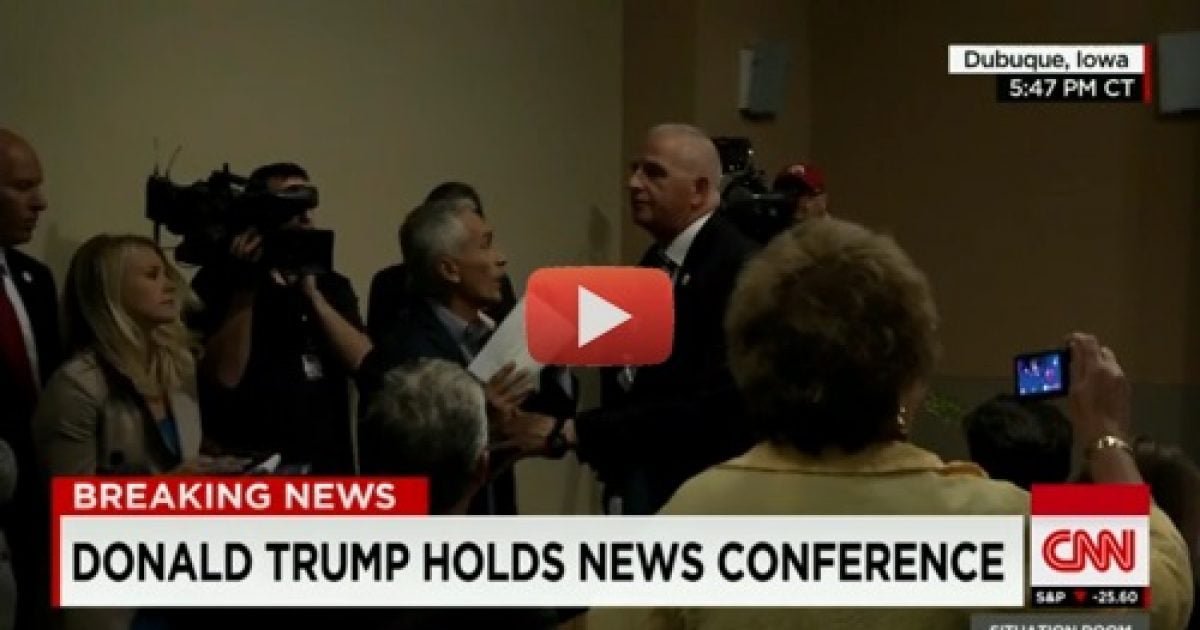 Nobody ever throws a journalist out of a press conference. Nobody except Donald Trump.

Univision anchor Jorge Ramos began speaking out of turn Tuesday at Trump’s press conference in Dubuque, Iowa.  As he stood and began asking a question, Trump said “who’s next?” and pointed to a different journalist.

And that’s when the drama began.

“Excuse me, sit down, you weren’t called,” Trump said, as Ramos continued to speak.  “Sit down. Sit down,” then finally, with his New York temper flaring, Trump intoned “Sit down!”

The billionaire candidate attempted to move on, but Ramos wouldn’t relent.  Agitated, Trump told Ramos, “Go back to Univision.”

Then Trump looked to his left off-stage, and a large man (presumably security) walked over, had a few words with Ramos, and escorted him from the room.

When reporters challenged Trump as to why Ramos was removed, he said “I don’t know much about him. I don’t believe I’ve ever met him except he started screaming.”

The gravitas (or comedy) of the moment was not lost on conservatives posting on social media.  National Review editor Jim Geraghty speculated on changes a future President Trump might make to the White House Briefing Room, leading to a quite interesting discussion on Twitter.

Under President Trump, the White House Brady Press Briefing Room will be rebuilt with trapdoors.

@wardamngunners @jimgeraghty built over a pool so it will be a dunking booth.

Later in the press conference, like a principal allowing an unruly student back in the classroom, Trump said, “I don’t mind if he comes back, frankly.”

Watch Ramos being thrown out in the clip below and the exchange that took place when he was allowed back HERE.