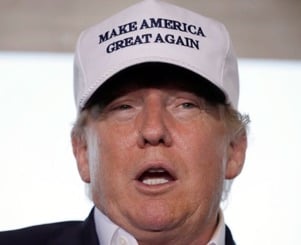 Donald Trump’s long-awaited position paper on immigration reform contains one point sure to get Americans talking about what makes a person an American citizen: Trump wants to end “birthright citizenship.”

The U.S. Constitution does not define the term “natural born citizen,” and the Supreme Court has never tackled this question head-on, but according to a 2011 Congressional Research Service report, persons being born “in” the United States, “even those born to alien parents” are considered natural born citizens.

Trump’s proposal would change that definition for the first time since 1790, when Congress passed the Naturalization Act.  “We have to make a whole new set of standards,” Trump said. “And when people come in, they have to come in legally.”

Trump said Sunday on NBC’s “Meet the Press” that he would try to end citizenship rights for children of families living illegally in the U.S.

“They have to go,” he said. “What they’re doing, they’re having a baby. And then all of a sudden, nobody knows … the baby’s here.”

Congress has the Constitutional authority “to establish a uniform rule of naturalization,” although some believe that the change will require a constitutional amendment, requiring approval of two-thirds of both houses of Congress, along with three-fourths of the nation’s state legislatures.

“This is exactly the plan America needs,” Sessions said in a statement. “Crucially, this plan includes an emphasis on lifting struggling minority communities, including our immigrant communities, out of poverty, by preventing corporations from bringing in new workers from overseas to replace them and drive down wages.”

The editors at the conservative publication National Review disagreed with Trump, calling his ideas “amnesty-laundering.”

There is, in fact, no pressing immediate need to either deport the 11 million illegals, including those brought here as young children, or to normalize their status. Many of them have been here for decades, and while this situation is deeply undesirable, it is no more undesirable today than it was five years ago.

Redefining who is an American citizen is, after 225 years, no small step.  Do you stand with Trump or with his critics on this issue? We’d like to hear from readers on the issue in the comment section below.