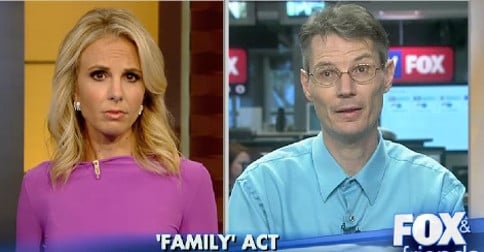 You could say he had God on his side.

An amazing story from Florida brings to mind the “Black Robed Regiment,” the name British forces gave American clergy for their courage during the Revolutionary War.

A pastor was forced to spring into action Sunday when his congregation was being robbed, and he warns the next would-be crook that he’s “armed and ready” for the next time.

Pastor Les Snodgrass appeared Thursday on “Fox & Friends,” and told co-host Elisabeth Hasselbeck that he was conducted services Sunday at The Door Christian Fellowship Church in Melbourne, Florida, when 21-year-old John Grace, who had attended services before, tried to rob the congregation.

“He pulled a gun from his bag and put it up to my mother’s head,” Snodgrass said, adding that Grace pulled out some cable ties and told the pastor’s wife to start restraining their children.

Snodgrass said he knew he had to act when Grace pulled out a butcher knife. That’s when the pastor and his son pounced on the robber, holding him until police arrived.

“I’d like to say I made a conscious choice to do something,” he said. “But the next thing I know, I had him pinned against the wall.”

Melbourne police arrested Grace, who was charged with armed robbery and 20 other charges, according to CBS affiliate WKMG.

The weapon Grace used Sunday was a BB gun modeled to look like the real thing, according to Fox, but the pastor doesn’t plan on being caught with his guard down if any kind of firearm is being wielded in his church in the future.

Snodgrass told Hasselbeck that after checking with police, he “was armed and ready” at Wednesday’s service.