When a New Jersey waitress showed her gratitude to two firefighters by paying for their meals, she never expected they would return the favor in such a big way.

Liz Woodward, 24, was serving the two men at the 130 Diner in Delran on July 23 when they asked for the biggest cup of coffee she could get them as they had been battling a warehouse fire all night, TODAY reported.

Woodward, overhearing the men, Tim Young and Paul Hullings, discussing the fire and how they hadn’t had a meal in a while,  decided to pay for their entire meal.

“I had been following the New Brunswick fire on the news,” she told TODAY. “This was their first meal in over 24 hours; the least I could do was buy it for them for all they do every day.”

Rather than a bill, she presented the men with a note that read as follows:

“Your breakfast is on me today — Thank you for all that you do; for serving others & for running into the places everyone else runs away from. No matter your role, you are courageous, brave, and strong… Thank you for being bold and badass everyday! Fueled by fire and driven by courage — what an example you are. Get some rest.”

Young was so touched by the gesture that he posted about it to his Facebook page, urging others to patronize the diner and added, “If Liz happens to be your waitress, tip big.”

When Young later found out that Woodward had a GoFundMe campaign to raise money to purchase a wheelchair accessible van for her father, he posted the link to help her achieve her goal. 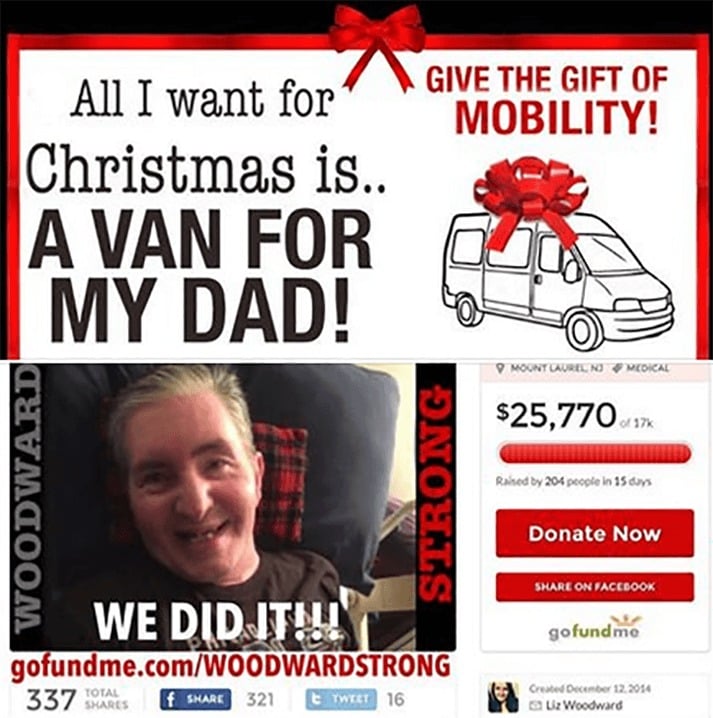 The fundraiser, which was started in December, was at a little over $25,000 at the time of the post last Thursday, but has since soared to over $68,000.

The firemen and Woodward have stayed in touch, and Woodward sees all the attention on their good deeds as an inspiration for others.

“People from all over the world have heard our story, and from it, they’re recognizing opportunities to do something little or big for someone else,” she told TODAY. “This is just one example of how so many people in this world have incredible hearts and they pay it forward so the circle keeps on moving.”