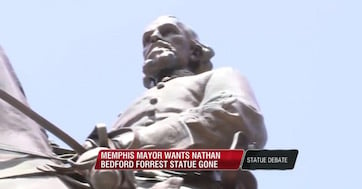 As if getting rid of the Confederate flag isn’t enough to bury the past, some radicals in Tennessee want to dig up the remains of the past — and bury them somewhere else.

In a move that can only be described as ghoulish, the Memphis City Council voted unanimously last week to remove the remains of a Confederate general and his wife from a city park.

The remains of Gen. Nathan Bedford Forrest and his wife are to be moved from under his statue in the Health Sciences Park to a yet-to-be announced location, according to local CBS affiliate WREG News Channel 3.

Forrest was remembered as an innovative cavalry officer during the war, and an advocate of the South in the post-war years. He served as a Tennessee delegate at the 1868 Democratic National Convention in New York.

Although he served as the Ku Klux Klan’s first Grand Wizard, in later years he distanced himself from the movement.

According to the city council’s attorney, Chancery Court would also have to sign off on the removal of the remains and the family of Forrest would be involved in the decision as well.

The removal of the statue of Nathan Bedford Forrest is a separate issue. The removal of the statue has been proposed as an ordinance before the council which will have to be read before the council three times before it can be approved. From there it will be presented to the Tennessee Historic Commission but there is no timeline for when they will make a decision. The next time the commission is scheduled to meet is in October

Officials from Elmwood Cemetery in Memphis informed the city council that it would be willing to accept the remains — but not the statue.

“It is no longer politically correct to glorify someone who was a slave trader, someone who was a racist on public property,” said City Council member Myron Lowery, who spearheaded the removal of the statue and graves.

Although the measure received unanimous approval among the council members, it wasn’t approved by everyone in attendance.

“I think it’s disgusting that people use the shooting in Charleston and use those victims to forward their own agenda and join this anti-Confederate hysteria that’s going on,” said Sons of the Confederate Veterans spokesman, Lee Millar, who referred to it as a “knee-jerk” reaction.

“To attack something like that now I feel is just really misguided,” he added.

.@CodeofUrukagina Moreover, flag thing IS an attempt to delete American history. To be sure, it did lead to this: http://t.co/MxG4bLRcg4

This makes me want to believe in Ghosts! Memphis votes to dig up remains of Confederate Civil War general, wife http://t.co/czuhDpX43Z

It’s Memphis’ decision to make but I REALLY think digging up the dead is going way too far http://t.co/0Y7V8iMe3u

It’s Memphis’ decision to make but I REALLY think digging up the dead is going way too far http://t.co/0Y7V8iMe3u

There’s something to be said for that. By wiping clean all evidence of Confederate history, like Hillary Clinton’s emails from her server, we’re turning America’s rich past into tasteless pablum.

Watch the news report from WREG.