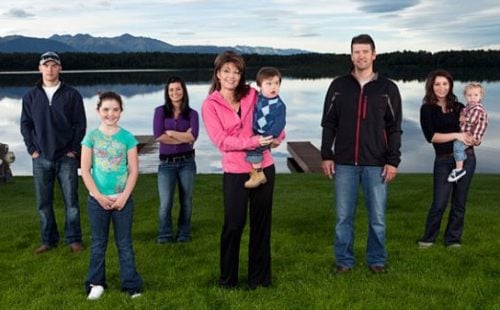 Based on little more than police confirmation that she was present, the rumor mill is running wild about an alleged drunken brawl involving several members of Sarah Palin‘s family.

According to the blog “The Immoral Minority,” which has a decidedly anti-Palin demeanor, the Palin family was at an Iron Dog snowmobile party Saturday in Anchorage when a brouhaha broke out.

There are different versions of which happened, with one story claiming Track Palin “stumbled out of a stretch Hummer” to defend the honor of his sister, and another saying Bristol allegedly unleashed a “flurry of blows” to protect Willow.

No pictures or videos have surfaced to corroborate any of the claims, which casts a dubious shadow on the whole affair considering just about everyone has a smart phone these days.

Casting further doubt on the story is that Todd Palin is said to have allegedly walked away with a bloody nose — Todd is one tough dude! — while his wife is screaming, “Don’t you know who I am!”

As if she needs to remind anyone.

The only “facts” are from “The Immoral Minority,” which reported on an alleged statement from the Anchorage Police Department:

On Saturday, September 6, 2014 just before midnight Anchorage police responded to a report of a verbal and physical altercation taking place between multiple subjects outside of a residence located on the 900 block of Harbor Circle .

A preliminary investigation by police revealed that a party had been taking place at a nearby residence and a fight had broken out between multiple subjects outside of the residence. None of the involved parties wanted to press charges at the time of the incident and no arrests were made. Alcohol was believed to have been a factor in the incident. Some of the Palin family members were in attendance at the party.

And that’s it — “Some of the Palin family members were in attendance at the party.”

But the liberal media needs little excuse to attack a conservative icon of Palin’s stature, having proven that in spades during the 2008 presidential election.

Not about to let a good rumor go to waste, there is now talk about the “Thrilla from Wasilla,” with terms like “backwoods brawl” and “hillbillies” being thrown about.

Anything to ridicule and mock the woman — just as Saul Alinsky prescribed.