Jake Tapper blows up at White House: 'How many dead veterans do you need?' 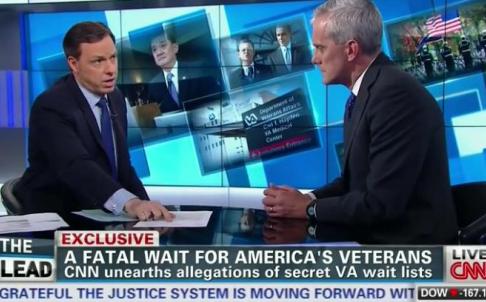 “How many dead veterans do you need before somebody asks the question within the White House, ‘Maybe this isn’t the best steward of these veterans’?” Tapper asked in exasperation.

“The question, Jake, is: Are we doing everything we can every day to get the veterans the care and opportunities they deserve?” McDonough replied.

“But you’re not!” Tapper fired back. “This letter was sent a year ago. And you guys ignored it.”

Tapper was referring to a letter to the Obama administration last year from U.S. Rep. Jeff Miller, R-Fla., chairman of the House Committee on Veterans’ Affairs, warning of “dramatic problems at the VA.”

The day after the interview, The Wall Street Journal reported:

A senior Department of Veterans Affairs official resigned Friday, just one day after testifying in front of a Senate hearing on the state of VA health care.

Dr. Robert Petzel, the undersecretary for health at the VA, resigned in the wake of allegations that employees in the VA health-care system kept unauthorized patient appointment wait lists that made wait times seem shorter than they actually were.

For the record, Petzel was planning to retire this year, having announced as much in September.