There are people who staunchly believe it’s unpatriotic to criticize the president of the United States. Apparently, these people think that “he’s our president, right or wrong, and we all need to support him, you know”. At least, that is what venerable stateswoman Britney Spears says.

It’s funny, because I know a few people who tell me it’s unpatriotic, but I don’t remember those people saying that when George W. Bush was president. 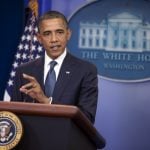 Well, there’s nothing in the U.S. Constitution or the Bill of Rights that states we are obligated to support our government, or any elected official in it. There are laws against treasonous behavior and laws against making threats of bodily harm, as there should be. But there is nothing obligating us to queue up and support all the policies and actions of those elected to public office. That’s a personal decision we are entitled to make. In fact, some would say it’s the solemn duty of every citizen to criticize elected officers when deserved, especially a president.

We live in a republic. The president and commander in chief works for us. We “hire” him when we elect him. Then we pay close attention to what he does on the job. In your mind, if he makes good decisions and serves your interests, you rehire him. If he’s a poor leader and decision-maker, you try to fire him in the next election by voting for his opponent.

If you don’t see Barack Obama as a patriot, why would there be a problem with criticizing him and his ideologies? It would be anti-American to remain silent if you believe the man is destroying the Constitution or shredding the Bill of Rights. It’s perfectly acceptable to criticize the president while respecting the office. If it’s unpatriotic to criticize the president, was then-Sen. Barack Obama unpatriotic to consistently criticize President Bush? Or, in the classic case of “what goes around comes around,” remember when Obama called Bush unpatriotic because Bush added to the national debt?

In the fullness of liberty, it is absolutely necessary to tell the truth about the acts of a president.  That means it becomes necessary for a patriot to hold any president accountable when he harms the country. A president’s conduct, good or bad, warrants support or opposition. Truth is, it becomes unpatriotic not to criticize harmful acts. Healthy debate and dissent are a hallmark of a democratic republic, to avoid mistakes and strengthen the country. We discard criticism at our peril. We ignore destructive incompetence at our jeopardy.

There is a serious question about whether this American president can be trusted to solve the problems he faces. Leadership is defined by results, not glib teleprompter speeches and the need to be liked. Control is not leadership, and allegiance to a president is not his right. Our country began by criticizing the King of England for his hard-fisted control over American colonists. King George sent the Redcoats, and still we ignored his crown and his confiscatory English laws.

Patriotic Americans criticized presidents from the beginning, starting with George Washington. In fact, the term “patriotism” means essentially “fatherland” in Latin, or to support the country, not the government. A patriot defends his country against its own government.

Mark Twain said it best: Patriotism is supporting your country all the time, and your government when it deserves it.