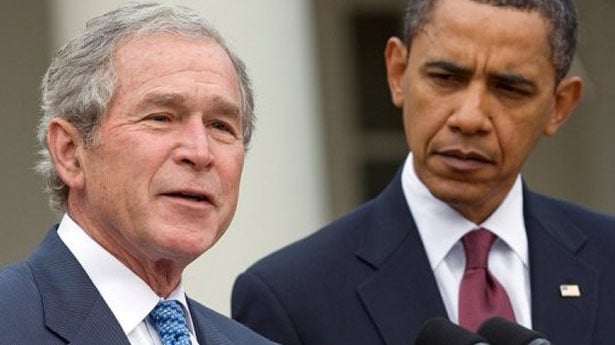 Published the day before Obama’s confusing “I don’t need Congress’ authorization to invade Syria, but I’m going to wait for it anyway” speech, the Telegraph’s Nile Gardiner noted that prior to the Iraq invasion, Bush amassed one of the largest military coalitions in world history — “roughly 40 countries.”

And what of Obama’s on-again/off-again excursion into Syria? Gardiner wrote:

As it stands, President Obama’s proposed military coalition on Syria has a grand total of two members – the US and France. And the French, as we know from Iraq, simply can’t be relied on, and have very limited military capability.

Gardiner then noted that any coalition between France and the United States is more than likely based on socialist political ideology than military objective.

“It is a truly embarrassing state of affairs when Paris, at best a fair weather friend, is your only partner,” Gardiner noted. “John Kerry tried to put a brave face on it at his press conference [Friday], by referring to France ‘as our oldest ally,’ but the fact remains that his administration is looking painfully isolated.”

Obama spent zero time trying to cultivate an alliance with Great Britain, choosing instead to cultivate his golf game. And what of Bush?

President Bush invested a great deal of time and effort in cultivating ties with key US allies, especially Britain. The Special Relationship actually mattered to George W. Bush. For Barack Obama it has been a mere blip on his teleprompter. Bush also went out of his way to build ties with other allies in Europe, including with Spanish Prime Minister Jose Maria Aznar, and an array of countries in Eastern and Central Europe. Obama simply hasn’t bothered making friends in Europe, and has treated some nations with sheer disdain and disrespect, including Poland and the Czech Republic.

The primary difference between the two presidents, according to Gardiner, is that while Bush was driven by conviction and possessed a clear set of goals in making “his case to the American people and to the world,” Obama’s “foreign policy has been weak-kneed, confused and strategically incoherent.” Ultimately, it’s one no one has a desire to share.

“President Bush may not have been greatly loved on the world stage, but he was respected by America’s allies, and feared by his enemies,” Gardiner concluded. “In marked contrast, Obama hasn’t generated a lot of respect abroad, and he certainly isn’t feared.”