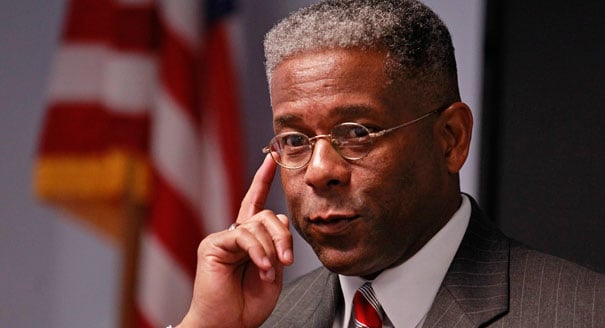 President Barack Obama said in the Rose Garden Saturday afternoon that he would have Congress decide whether to militarily respond to Syria’s use of chemical weapons. Former Republican Congressman Allen West began his Facebook response to this statement by reminding him where his most important obligations lay — protecting the American people.

“Sir, you turned your back on Americans in Benghazi, so do not pretend to lecture us about obligation,” West said, before launching into his analysis.

“He is afraid to make a decision so is now setting up Congress for the blame,” he continued. “We should not commit our Military because Obama said something stupid and especially since he does not have a strategic or operational objective.”

Abdication of responsibility as commander-in-chief? We were warned this would happen in 2008. Obama has a propensity for abdicating responsibility by voting “present,” and he did it again in his Rose Garden address.

West then made a not-so-gentle reminder of what events led to the escalation of violence in the Middle East — especially Syria.

“Perhaps if he had not decided to ‘end the Iraq War’ and left a residual force on the Iraq-Syrian border we would not have this situation,:” West observed. “I guess this is not so time sensitive, but it is a confirmation of Obama’s weakness.”

West closed his Facebook post with a firm statement of what his vote would be, if he were still serving in Congress.

“NO authorization for military action in Syria.”

West’s Benghazi reference is a reflection of his Friday post, in which he observed:

Consider the irony as we draw close to the one-year anniversary of the Benghazi attack.

President Obama says the use of chemical weapons in Syria threatens our national security and we have an obligation to act.

In contrast, our US Consulate (sovereign American territory) was attacked in Benghazi, our Ambassador was killed along with Sean Smith and two former Navy SEALS (Ty Woods and Glenn Doherty) and the only indignation shown was over a video. Need I mention the ensuing lies?

But where was the obligation to act in response to Benghazi? The events in Syria are horrific to be sure, but to dismiss the attack and loss of American lives in Benghazi is unconscionable.

He followed up by tweeting:

Empty speech from POTUS. Made the decision 2 make no decision. He has no strategic or operational obj. There should b no action in Syria.

POTUS says #Syria threatens US nat’l sec & we must act. But Benghazi attack on US embassy & US deaths are dismissed. Unconscionable.