The four State Department employees placed on leave over the handling of the terrorist attack on the American consulate that killed an American ambassador in Libya have been cleared of wrongdoing and are returning to work, the Daily Beast reported Tuesday.

The four include former Assistant Secretary of State Raymond Maxwell, who’d complained publicly that he’d been made a “scapegoat” for the attack on the Benghazi consulate on Sept. 11, 2012 . 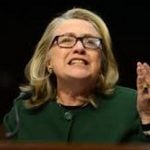 “No explanation, no briefing, just come back to work,” Maxwell told the Daily Beast. “So I will go in tomorrow.”

The Obama administration initially blamed the attack on an anti-Muslim video produced in the United States months earlier that had inflamed Libyan protesters.

That story fell apart within weeks, but the question of responsibility for the consulate’s vulnerability to a coordinated terrorist attack — and inaction during it while Americans died — remained.

While the State Department under then-Secretary of State Hillary Clinton had claimed it followed the recommendations of an Administrative Review Board investigation of the Benghazi attack led by retired Ambassador Thomas Pickering and retired Admiral Michael Mullen, congressional Republicans and other critics charged that the four were mid-level managers and punishment should fall on those with real responsibility higher in the chain of command.

Now, it looks like Secretary of State John Kerry has decided the punishment should fall on no one.

Maxwell, who had been reassigned from his post in the bureau for Near Eastern Affairs, had said he regarded the move as punishment because it was a loss of responsibility, though it was technically not a demotion and he still kept his job.

The three others placed on administrative leave were in the Diplomatic Security Bureau, the Daily Beast reported.

All are now back on duty and will face no further action, the Daily Beast reported.

“The overall goal is to restore my honor,” Maxwell told the Daily Beast.

Maxwell might now consider his honor restored. And the other three can consider their jobs restored.

And since all four were taking a fall for decisions that were made far above their heads and still haven’t been explained, that’s probably a good thing.

But there’s no way to restore the four lives that were lost. And so far there’s been no accountability higher up the chain of command, where the decisions were really made.

And to answer a former secretary of state’s rhetorical question, at this point that really does matter.

It matters a lot.