Florida Gov. Rick Scott is riding an improved state economy to higher approval ratings, and they are beginning to hold promise for his 2014 prospects.

Even though he still trails two of his three  most talked-about potential opponents for re-election next year, his numbers are moving in the right direction, according to a poll released Tuesday. 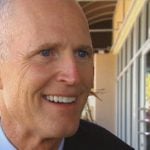 Neither Crist nor Nelson has officially entered the race.

As for former state Sen. Nan Rich, D-Weston, the only serious Democrat to have announced a candidacy, Scott would beat her 42 percent to 36 percent, Quinnipiac’s numbers suggest.

Crist has been widely expected to seek the Democratic nomination since completing his 2010 divorce from the Republican Party and becoming a Democrat in December.

Some Democrats have been urging Nelson to run for governor after his comfortable re-election last year against Republican challenger Connie Mack. Now beginning his third term, Nelson wouldn’t have to give up the Senate seat to seek the state office .

While the numbers show Scott running behind both men, the poll had some good news for his re-election, showing his favorability at 40 percent — the highest of his term and up from 33 percent in March.

“It is an indication of how far down Florida Gov. Rick Scott’s numbers have been that he can take some solace from a poll that finds him losing by 10 points to his predecessor in the governor’s office,” Peter A. Brown, assistant director of the Quinnipiac University Polling Institute, said in a news release.

And that’s in the face of relentless pounding by the Florida media, which haven’t liked Scott from the get-go. Ever since he spurned kow-towing visits to newspaper editorial boards in his first campaign, his coverage has been negative in ways a new Crist campaign will probably never see.

Consider the coverage of the Democrats’ recent fundraising bash, the Jefferson-Jackson Dinner in Hollywood.

Fair? Only to those who think a Republican fundraiser mocking a Democratic incumbent – an incumbent who has presided over a steadily decreasing unemployment rate and generally improving economy — would be as readily whitewashed.

And it was right.

Scott is comfortably ahead of the only Democrat who’s officially in the race.

One of the two potential Democrats he’s trailing is 70 years old, has just won a new Senate term in Washington, and is basically demanding that party leaders beg him to enter the race; the other is a “Democrat” not even Democrats believe is a Democrat.

Scott’s trailing, but his numbers are headed in the right direction.