There are some lines you don’t cross unless you’re a flaming liberal host of a failing show on a ratings-challenged network.

His insane attack Thursday night was in retaliation for Giuliani having recently said “incompetent decisions” by the Obama administration were to blame for the deaths of four Americans in Benghazi.

O’Donnell played a segment of Giuliani on Fox News saying, “There’s no possible way, if I found out for six months one of my police precincts was being attacked, that I would deprive it of security.”

O’Donnell then went off on Giuliani, blaming him for the NYFD’s faulty radios that he said caused the deaths of firefighters:

You know, the fact that Rudy Giuliani was an unwitting accomplice of al-Qaida’s has mostly escaped attention outside of New York.

Let’s tonight focus on the decisions Rudy Giuliani made that killed firefighters on 9/11.

The segment via MSNBC is here:

O’Donnell took to Twitter after his show to reiterate his point, the Blaze reported: What ensued was a righteous smackdown of O’Donnell. The following comments were the most emotionally charged. 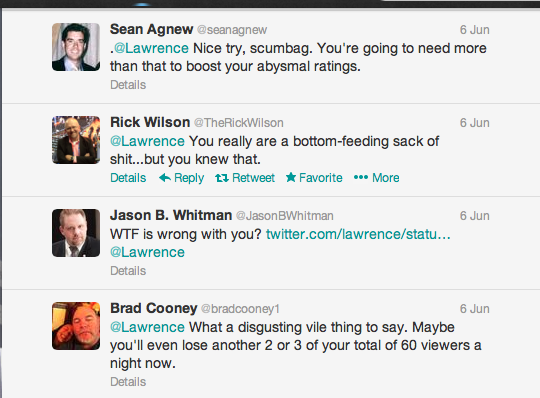