An Air Force video saluting first sergeants was ordered removed by the Pentagon because it mentions the word “God” which, top brass fears, may insult atheists or Muslims. 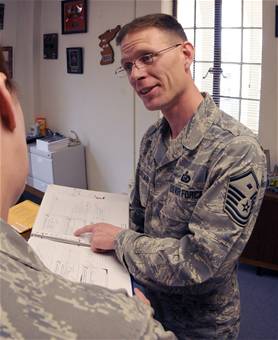 The video was based on the famous “So God made a farmer” commentary written and narrated by the late radio broadcaster Paul Harvey. The Harvey piece was later dusted off and used in a Dodge Ram Super Bowl commercial.

The first sergeant tribute was created by a Joint Base McGuire-Dix-Lakehurst chaplain as a poem, which was later made into a video titled, “So God created a First Sergeant,” according to Fox News Radio’s Todd Starnes.

The chaplain leaders at the New Jersey joint Army, Navy and Air Force base gave the tribute its seal of approval, as did the the base command structure prior to publication. Shortly after is was posted on YouTube it came to the attention of the Pentagon.

“Proliferation of religion is not allowed in the Air Force or military,” wrote the chief of the Air Force News Service Division in an email obtained by Fox News. “How would an Agnostic, Atheist or Muslim serving in the military take this video?”

“I would not recommend using this at all,” the chief wrote.

In addition to his objection of the video’s repeated use of the name “God,” the chief found its opening lines objectionable.

“The choice of ‘On the Eighth day’ verbiage to begin this video is highly suggestive from the book of Genesis in the Bible and has Christian overtones,” he wrote.

Well, to be fair, it would also have Jewish overtones. That leaves Muslims, atheists, Buddhists, Hindus and all the rest. But the video was never intended to be required viewing — even by Christians and Jews.

Nonetheless, the video was removed to assure it meets military “religious neutrality” standards.

“The Air Force removed the ‘God Created a First Sergeant’ video from the official Joint Base McGuire Dix YouTube site to evaluate whether it is consistent with official Air Force guidance, to include whether it meets official guidance governing religious neutrality in the Air Force as prescribed in Air Force Instruction 1-1, Air Force Culture,” spokesperson Ann Stefanek said in a statement.

One would think the Pentagon would have loftier concerns — apparently not.

One would also think that if the Harvey original, “So God made a farmer,” was appropriate to be disseminated to the general public on last Super Bowl Sunday, the Air Force chaplain’s “So God created a First Sergeant” would work for the military. The Air Force must have turned into wusses.

Read more at Fox and watch the video causing the stir.