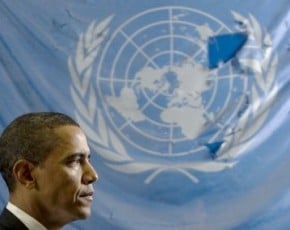 Individual states are now showing the United Nations the backbone that the United States is apparently lacking.

On Oct 21 we reported that the UN was sending 44 poll watchers from their affiliate, the Organization for Security and Cooperation in Europe (OSCE), to monitor our elections. They were doing so at the urging of various left-leaning organizations.

Moreover, they plan to go way beyond mere poll watching. According to Giovanna Maiola, spokeswoman for OSCE, “They are focusing on a number of areas on the state level, including the legal system, election administration, the campaign, the campaign financing [and] new voting technologies used in the different states.”

According to The Hill, Iowa has now joined Texas in telling the UN poll watchers, “Thanks, but no thanks.”

Iowa Secretary of State Matt Schultz said, “My office met with two delegation representatives last week to discuss Iowa’s election process and it was explained to them that they are not permitted at the polls. Iowa law is very specific about who is permitted at polling places, and there is no exception for members of this group.”

Iowa’s decision comes after a letter Greg Abbott, the Texas Attorney General, wrote last week informing the UN-affiliated group that they “are not authorized by Texas law to enter a polling place” and that moreover it “may be a criminal offense for OSCE’s representatives to maintain a presence within 100 feet of a polling place’s entrance.”

Although Abbott was merely reciting Texas elections law — very similar to that of most other states, including Florida — the OSCE took offense.

Janez Lenarčič, the director of the OSCE Office for Democratic Institutions and Human Rights (ODIHR), fired back in a statement, “The threat of criminal sanctions against [international] observers is unacceptable. The United States, like all countries in the OSCE, has an obligation to invite ODIHR observers to observe its elections.”

Read the full report at The Hill.