The crisis we face today that has resulted in an ever more aggressive and truculent, militant Islam threatening the foundations of Western civilization – without and within, bears an uncanny parallel, almost a parallel universe, with the dreadful anxiety-filled 1930s.

A time when a virulent Nazism intimidated and cowed much of public opinion throughout the United States.

The incident at Ft. Hood, in which an American born Muslim carrying out the tenets of Jihad resulting in numerous deaths that has “dumbfounded” the Pentagon, puts into the sharpest relief the blindness of our highest authorities, both civilian and military, and their total ignorance of Islam and its many followers who are committed to jihad yet thrive and scheme while protected by our laws.

Dozens of “isolated incidents” involving Muslims committing heinous acts of murder and honor killings have been swept under the carpet by our government and mass media treating the guilty as “lone individuals” suffering from “derangement” while ignoring the ideology that lies at the bottom of their mental instability. 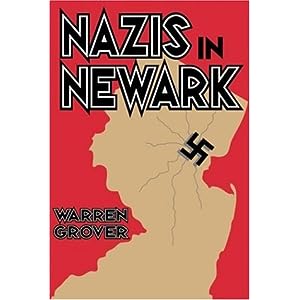 This is all the more reason to read “Nazis in Newark” by Warren Glover (Transaction Publishers, New Brunswick, NJ. 2003;  ISBN 978-0-7658-0516-4),  a book that reveals a parallel history two generations ago with the apathy to danger in our midst today.

Under the impact of a world depression, a large majority of isolationist public opinion in the United States including many self-styled Liberals sought to adopt a default policy of America first, excusing anti-Semitism, making amends for saddling Germany with war guilt and avoiding any rearmament.

Their first object of assigning blame was then, like today, to avoid placing it on the Germans, or the Muslims and their allegiance to Nazi and Jihadist doctrines, but instead on those “war-mongers” who “inflamed emotions” by a “reckless foreign policy,” one that dared to confront the evil ambitions or ruthless dictators and fanatics who had constructed a scenario blaming the Jews for all the world’s ills.

This book is an accurate and insightful account of the struggles of decent Americans who sought to call public attention to the growing menace of Nazism within the United States and the confrontations on the streets of Newark, New Jersey which witnessed the most direct physical battle of the era between Nazi sympathizers and American Jews.

It recalls a parallel universe to today’s battles with one notable exception, the absence then of much of the current insane political correctness and “multiculturalism” that excuses Islamist crimes and designs to wreck the foundations of American democracy and self-defense.

Glover’s book casts a sharp clinical light from the standpoint of history on the sanctimonious attitude of Jewish Obama supporters who have created the ultra-Liberal “J-Street” refusing to acknowledge the open anti-Semitic stance or radical Far Left character of many of the President’s most influential supporters, associates and appointees who demean and defame Israel and Zionism.

For them, any sign of Jewish pride must be demeaned in order to secure their certificate of “kashrut” (approved Kosher) as loyal Democrats for whom all other ethnic, racial or religious groups must be encouraged to seek special favor from the government and be recognized as an important and proud element of a rainbow coalition.

In a strange irony, many of these ultra-Liberal, ultra-Reform Jews apparently act from much the same motivation and rationale as ultra-Orthodox Jews, convinced that they are setting an example for all the Gentiles as a priestly caste bringing “Light unto the nations,” thereby fulfilling God’s commandments.

Like their Orthodox grandparents, they feel obliged to seek forgiveness for their sins but instead of once a year on Yom Kippur and turning to God, they seek to assure their Liberal cohorts, “world opinion”, the U.N., political correctness, and now President Obama that they are good Jews who are sufficiently self-critical.

While their parents and grandparents rejoiced at the rebirth of Israel in 1948 and regarded it mystically as partial compensation for the Holocaust, they have been psychologically intimidated by the constant anti-Israel line of the media and of the torrent of bloody confrontations picturing enraged Muslim mobs ready for constant mayhem to avenge what they regard as the worst injustice in human history (i.e. the creation of the Jewish State rather than the failure to establish an Arab Palestinian state).

In the 1930s, there were many Jews who at first timidly hoped for the Nazis to eventually change their tune and agreed to support a behind the scenes approach in order to avoid a confrontation that might embarrass a Democratic administration afraid of being labeled as interventionist in foreign policy yet, by 1939, the overwhelming majority of Jews and a growing majority of Gentiles realized that there could be no new “world order” as promulgated by the Nazis that would not be hostile to American interests and ultimate survival.

The same realization of the Jihadist vision of a new world order today fails to mobilize the same call to arms.  When Jews actually organized successful real resistance in DEEDS and not just WORDS in the Newark riots against the pro-Nazi organizations “Friends of the New Germany” and the “German-American Bund”, the initiative was largely on the part of conservative leaning Jewish war veterans with battle experience, professional and amateur boxers, gangsters, machinists, plumbers, glaziers, athletes, butchers and upholsterers with muscle power rather than the pious statements of “activists” on the Left and liberal leaning “progressive rabbis.”

The same was true in Britain after World War II when the “1943 Group” of Jewish war veterans took to the streets of London to forcefully evict the remnants of Moseley’s British Union of Fascists in defiance of the requests of the establishment British Board of Deputies who pleaded for British Jews not to act as vigilantes and leave their protection to the police (see The 1943 Group by Morris Beckman, A Centerprise Publication, London. 1992.)

The long dormant and docile majority among many Jews still suffering from a time warp in which FDR was regarded as a savior is wholly ignorant of the perfidious roles played by the New York Times and the BBC in their decades’ long campaign to slander and malign “The Jewish State” (the very term offends their international and cosmopolitan sensibilities).

The Jewish worship for learning continues to venerate what so many Liberals regard as “our finest academic Ivy League Institutions” such as Columbia, Harvard, Yale, Vassar and Barnard, aware that these names conjure up the picture of perfect liberal respectability with complete ignorance that precisely these universities were among the most anti-Semitic in their enrollment restrictions against Jewish students in the interwar years and that some of their most prominent faculty members including presidents and deans defended warmer foreign relations with Nazi Germany and opposed any anti-German economic boycott  (Stephen H. Norwood’s “The Third Reich and the Ivory Tower; Complicity and Conflict on American Campuses”; Cambridge University Press, 2009).

Many among today’s Jewish Liberals have convinced themselves that the Religious Right in Israel is their principal enemy and that to win credibility as progressives they must support a position that calls on Israel to make unlimited concessions no matter what the consequences. They follow the classic definition of insanity– “repeating the same course of failed action and still believing that the outcome will be different.”

In the meantime, since the “Oslo Accords,” most Israelis have been cured of that form of insanity and realize the futility of continuing to act as if the Palestinian side with Iranian encouragement intends to abide by any of the promises made.

Flashback to the 1930s: Newark, New Jersey became the prime stage of confrontation due to its ethnic make-up and proximity to both New York and Washington, D.C. From 1933 until Pearl Harbor, it was the most prominent American city where the struggle against Nazi sympathizers took on the dimensions of pitched street battles.

It is worthwhile recalling how the political battle for “hearts and minds” of Americans was fought and how the anti-Nazi struggle successfully engaged both Jews and Gentiles including German-Americans.

This is particularly important in the light of today’s squeamishness among the “politically correct” Left wing of the Democratic Party to demand that Muslim-Americans express their condemnation of Jihadist activity around the globe and the sympathy, aid and comfort rendered to those fighting our troops and murdering civilians in Iraq and Afghanistan and on a dozen other fronts.