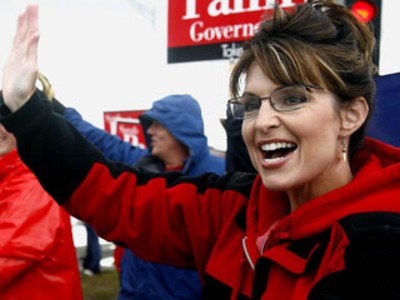 Editor’s Note – While it cannot be denied that Palin is a figure to be reckoned with in 2012, what’s is noteworthy is that almost everyone has an opinion of her, be it positive or negative.

Being such a polorizing figure, will this prevent her from entering the race?  What can she do, if anything, to improve her unfavorable ratings?

Just as she does in real life, she stands out in this poll as an individual that captures the imagination of America.  There have been precious few in our history that have achieved this lofty standing.  If ever there were a time when such a person were needed, it is today.

Palin’s 76% Favorable Among Republicans Tops Others in GOP

PRINCETON, NJ — Former Alaska Gov. Sarah Palin is the best known and most positively rated of five possible contenders for the 2012 Republican presidential nomination. Her 76% favorable rating among Republicans is higher than those for Mike Huckabee, Newt Gingrich, Mitt Romney, and Bobby Jindal.

Huckabee and Gingrich have similar 64% to 65% favorable ratings among Republicans, Romney has a lower 54% rating, and Jindal, less well known even to Republicans, has the lowest positive rating of the five.

None of these politicians has officially announced a bid for the 2012 Republican nomination, although Gingrich has recently indicated that he is thinking seriously about it. Still, the other four have maintained visible public profiles: Palin, Huckabee, and Romney, through media appearances and endorsing 2010 GOP candidates for Congress; and Jindal, in managing his state’s response to the Gulf oil spill. All but Jindal have political action committees that have been actively raising money in recent months. At this point, Palin, Romney, and Gingrich have similar unfavorable ratings among Republicans, while Huckabee’s and Jindal’s are slightly lower.

Among All Americans, a Slightly Different Picture

Palin is the best known of the five to all Americans, but with a decidedly mixed image: 44% rate her favorably and 47% unfavorably. Her image is similar to that of former Speaker Gingrich, who has lower name recognition, but similar closely divided favorable and unfavorable ratings. The other three Republicans are not as well known, but are viewed more positively than negatively.