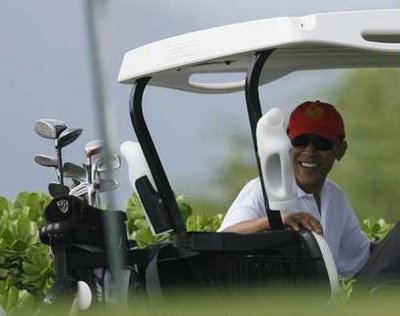 Disaster in the Gulf: 63 Days and 7 Rounds Of Golf…

White House spokesman Bill Burton on Monday said he doesn’t “think that there’s a person in this country that doesn’t think that their president ought to have a little time to clear his mind.”

Obama has been on the links frequently since moving into the White House. Over the weekend, Obama played the 39th round of golf of his presidency.  On Friday he went to a Washington Nationals game, and hosted a concert by Paul McCartney less than three weeks ago.

Former President George W. Bush publicly gave up the game of golf while in office, saying he didn’t think it was appropriate that he keep playing while troops were fighting in Iraq.

The Obama administration claims it has been on top of the Gulf oil spill disaster since “day one.”  Here’s a look at some of what the president has been doing since the Deepwater Horizon rig exploded April 20, triggering the massive spill.

May 29 – Obama returns to Chicago for his Memorial Day weekend vacation.

May 26 – Obama visits a solar facility in Fremont, Calif.

May 25 – Obama travels to San Francisco for fundraisers for Sen. Barbara Boxer, D-Calif., and the Democratic Senatorial Campaign Committee.

May 05 – Obama attends a Cinco de Mayo celebration at the White House.

Apr 23 – Obama and the first family travel to Asheville, N.C., for vacation.