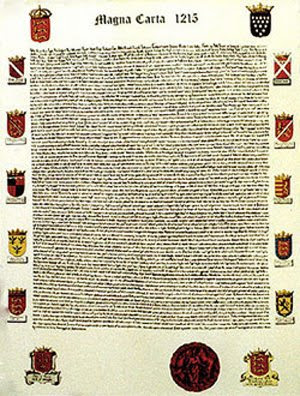 Before the Tea Party

Today, the 15th of June, is the 795th anniversary of King John of England’s signing of the Magna Carta. He didn’t do it willingly. His leading nobles, those discontented barons, had brought him to the field at Runnymede with a simple choice: sign or fight. King John reckoned the cost and decided the better part of valor would be to sign the document.It is from that date in 1215 that we of the English-speaking world trace the idea of limited government. The king recognized that there were limits to his power by matter of right and all successive kings and queens were required to swear a coronation oath before God that they would abide by the limitations set out in Magna Carta.

We in the U.S. are fortunate to have in Washington an original of the Magna Carta that dates from 1297. With the amendments that kings and nobles of the Thirteenth Century agreed upon, this version of Magna Carta on display at the National Archives is the one that modern British monarchs swear to uphold. And all ministers of the Crown — the Prime Minister and all his Cabinet colleagues — agree to be bound by Magna Carta, as well.

Twenty years ago, when the French were celebrating the 200th anniversary — a bicentenaire — of their own bloody revolution, President Mitterrand invited the G-7 leaders to Paris to join in the party. President George H.W. Bush attended, representing the U.S. So did Margaret Thatcher, then Prime Minister of Great Britain.

The French press swarmed down on Mrs. Thatcher, the “Iron Lady” always being good for a juicy quote. Recalling that Britain had fought for twenty years against Republican France and its successor, Napoleon Bonaparte, they were expecting fireworks even before Bastille Day lighted up the Champs Elysee.

Mrs. Thatcher did not disappoint. What did she think of the French Revolution? “It resulted in a lot of headless bodies and a tyrant,” she said. But, but, the speechless reporters countered, don’t you think the French Revolution marked the beginning of human rights? “Certainly not,” Maggie answered with steely determination, “that began with Magna Carta.”

Winston Churchill would have agreed with Mrs. Thatcher. He praised Magna Carta in 1956:

Here is a law which is above the King and which even he must not break. This reaffirmation of a supreme law and its expression in a general charter is the great work of Magna Carta; and this alone justifies the respect in which men have held it.

Our current TEA Party movement in America takes its inspiration from the Boston Tea Party of 1774. That’s when Americans — demanding their rights as Englishmen, protesting against King George III’s violations of Magna Carta — dumped English tea into the harbor. Our TEA Party activists are right to protest against an all-powerful, all-taxing, all-spending government.

We are reading reports, quiet undercurrents relegated to the back pages of the mainstream press, that ObamaCare is already taking a toll. Already, companies are calculating they will be better off dumping their employees health care plans and paying the fine to the government than in trying to keep up with escalating costs. ObamaCare was supposed to “bend the cost curve.”

It has — but upwards.

Americans continue to oppose ObamaCare, all polls show. They did not want it when it passed.

They still do not want it. They want their representatives to listen to them.

Magna Carta, of course, did not guarantee the right to vote to all those yeoman farmers of England. All those yokels and churls would have to wait for centuries before their voices were heard, too. But Magna Carta did lay down a strong foundation for “consent of the governed” which has come down to us as representative democracy. More and more, Americans today are roaring their dissent, demanding relief from a government that seems to recognize no limits to its own power and influence.