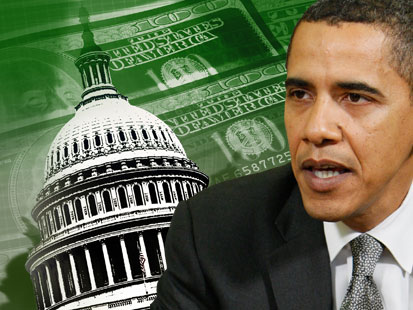 Editor’s Note – Obama and the Progressive left know that in order to avoid an absolute blood bath in November, the economy must come around.  Yet, the country continues to struggle and several states are about to go under financially.

Even though this administration continues to tout the benefits of the Stimulus Package, there is little tangible evidence to support the claim that it has helped at all, and, this request is little more than a calculated effort to drive results at the ballot box.

And, even worse than that, it further rewards the failed economic policies of states that have become overburdened by self imposed entitlement programs and other wasteful spending.   It’s time to pay the piper, America!

President Obama urged reluctant lawmakers Saturday to quickly approve nearly $50 billion in emergency aid to state and local governments, saying the money is needed to avoid “massive layoffs of teachers, police and firefighters” and to support the still-fragile economic recovery.

In a letter to congressional leaders, Obama defended last year’s huge economic stimulus package, saying it helped break the economy’s free fall, but argued that more spending is urgent and unavoidable. “We must take these emergency measures,” he wrote in an appeal aimed primarily at members of his own party.

“I think there is spending fatigue,” House Majority Leader Steny H. Hoyer (D-Md.) said recently. “It’s tough in both houses to get votes.”

The House last month stripped Obama’s request for $24 billion in state aid from a bill that would extend emergency benefits for jobless workers. Senate Majority Leader Harry M. Reid (D-Nev.) hopes to restore that funding but with debate in that chamber set to resume this week, he acknowledges that he has yet to assemble the votes for final passage.