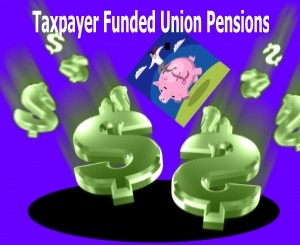 Editor’s Note – Perhaps, we now know what Obama and Andy Stern, recently resigned president of SEIU, and the top White House visitor, were talking about so often?  This bailout is as outrageous as it is audacious.

Of course, the union pension funds would be healthier, had the unions not poured millions of dollars into getting Obama elected.

“We spent a fortune to elect Barack Obama — $60.7 million to be exact — and we’re proud of it,” boasted Stern.  And, that’s SEIU’s contributions alone – overall, since 1990, labor unions have contributed over $614 million to support Democratic candidates!

The payoff for SEIU was not one but two Cabinet appointees: Health and Human Services Secretary Kathleen Sebelius and Labor Secretary Hilda Solis.  In addition, SEIU Secretary-Treasurer Anna Burger was appointed to the president’s Economic Recovery Advisory Board.  And, former SEIU chief lobbyist Patrick Gaspard served as the Obama campaign’s national political director and transition deputy director of personnel.

Is there even such a thing as ‘conflict of interest’ in American politics anymore?

The Next Bailout: $165B for Unions

A Democratic senator is introducing legislation for a bailout of troubled union pension funds.  If passed, the bill could put another $165 billion in liabilities on the shoulders of American taxpayers.

The bill, which would put the Pension Benefit Guarantee Corporation behind struggling pensions for union workers, is being introduced by Senator Bob Casey, (D-Pa.), who says it will save jobs and help people.

As FOX Business Network’s Gerri Willis reported Monday, these pensions are in bad shape; as of 2006, well before the market dropped and recession began, only 6% of these funds were doing well.

Although right now taxpayers could possibly be on the hook for $165 billion, the liability could essentially be unlimited because these pensions have to be paid out until the workers die.

It’s hard to say at the moment what the chances are that the bill will pass. A hearing is scheduled Thursday, which will give the public a sense of where political leaders sit on the topic, said Willis.

Just last week President Obama said there would be no more bailouts.