Editor’s Note – If this were a Republican President, I think it’s safe to say that the media would be doggedly pursuing this story 24/7…instead, it is all but ignored.  Yet, another indication of the complicity of today’s media with the like minded left in government… 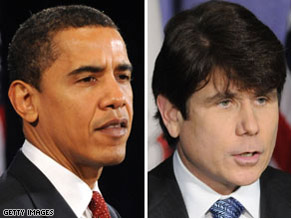 WASHINGTON — Sections of court papers filed by scandal-scarred former Illinois Gov. Rod Blagojevich that were mistakenly made public show a deeper involvement by President Obama in picking his Senate successor and call into question the president’s public statements on the case.

According to passages in the papers filed Thursday by Blagojevich’s lawyers — which were blacked out under a judge’s order but made visible by a computer glitch — Obama, then president-elect, spoke directly to the disgraced governor on Dec. 1, 2008.

But just one week later — on the day Blagojevich was indicted — Obama told reporters flatly, “I had no contact with the governor or his office, and so we were not — I was not aware of what was happening.”

Editor’s Note – You may recall that David Axelrod said at the time, “I know he’s talked to the governor and there are a whole range of names many of which have surfaced, and I think he has a fondness for a lot of them.”  Axelrod later issued a statement saying. “I was mistaken when I told an interviewer last month that the President-elect has spoken directly to Governor Blagojevich about the Senate vacancy. They did not then or at any time discuss the subject.”

And, a picture quickly surfaced showing Obama and Blagojevich shaking hands on December 2nd, just one week before Obama made his denial that he had spoken to Blagojevich.  Still the media largely ignored the obvious mis-statement…

The allegation is just one of a host of thorny claims about Obama that were apparently inadvertently revealed when a blogger found it was possible to read the redacted lines by simply copying and pasting them into a regular text file.

Blagojevich is set to go on trial in June on charges that he tried to sell the Senate seat vacated by Obama. The judge had ordered large sections of the defense team’s filing to be blacked out.

The newly revealed sections also contradict Obama’s claims that he never discussed favorable legislative action in exchange for a large campaign contribution with his former neighbor, fund-raiser and key supporter Tony Rezko, who has since been convicted of fraud.

Blagojevich’s lawyers charge that Rezko has told the feds that, indeed, he did have such conversations with a “public official.” The defense believes the official to be Obama.

Also contained in the unredacted papers is a claim that, contrary to his denials, Obama did push longtime friend and adviser Valerie Jarrett for his old Senate seat using a union official as a go-between with Blagojevich.

The filing indicates that the union official has testified to federal investigators about a phone call he had with Obama on the day before he won the presidency in which he indicated that Jarrett “would be a good senator for the people of Illinois and would be a candidate who could win re-election.”

The White House has refused to comment on the case.