And, Rep. Alan Grayson continues to make vile references to average Americans who are concerned about the growth and irresponsible spending of the federal government.  This is also a good example of your ‘representatives’ priorities, as we endure record setting unemployment here in Florida, he’s yucking it up on the Left Coast with the liberal elite of Hollywood, insulting millions of Americans to raise money, outside of the district, for his re-election. 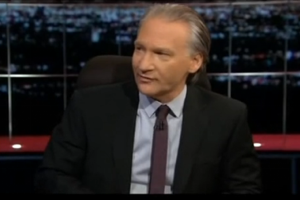 For a show hosted by one of the most liberal hosts on TV, last night’s Real Time with Bill Maher was pretty racially charged. Discussing the new Arizona immigration law and relating it somehow with an incident on Family Feud where a contestant claimed Ellen Degeneres hated America, Bill Maher concluded that “the problem in America is older white people.” He didn’t meet much opposition from his panel.

The panel last night consisted of the Eisenhower Institute’s Susan Eisenhower, the Weekly Standard’s Matthew Continetti and Florida Congressman Alan Grayson, who dressed up for the occasion in a gaudy American flag tie that even Maher had to quip about.

While Continetti kept the immigration conversation close to the political sphere, arguing that social and immigration issues could drive the recent influx of independents into the Republican party away, Maher and Grayson considered the bill a product of a dying form of racism and a response from people who are still “upset about the outcome of the Civil War,” which, while radical, was at least a relevant point to make in light of the racial profiling issue.

Then Maher shifted gears to discuss the Family Feud contestant that considered Degeneres anti-American, which gave Grayson the opportunity to try out a new joke in his ever-evolving stand-up routine: “she was in Finding Nemo and she played a character in Finding Nemo that couldn’t remember anything that happened more than a year ago, so I figured maybe she was a teabagger.” He’s a natural, that Grayson. Anyway, he then went on to call the man a “racist” for attacking Degeneres, to which Maher responded that the problem with America was– you guessed it– the existence of a certain race, namely “white people.”

Video – For the ‘strong of stomach’!