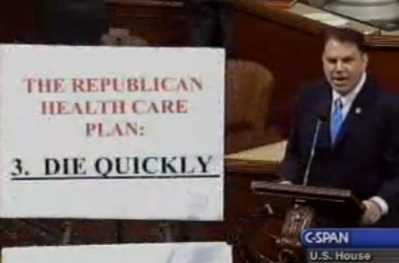 Unanswered question: How did Alan Grayson know about this meeting? Who informed him? Was this staged?

Matthew Falconer, candidate for Orange County Mayor, quickly challenged Alan’s rudeness. Grayson demanded not to be interrupted, but Falconer quickly reminded the congressman that he is in fact interrupting their meeting.

Linda O’Keefe, member of the Orange County Republican Executive Committee and extraordinary patriot volunteer with the Orlando Tea Party said, “I’m wondering if Grayson realizes that we do still, for now, have the right to assemble! But can’t we have a meeting without being interrupted by our congressman?”

Currently, there are 12 Republican candidates looking to send Alan Grayson to the unemployment line in November.

Tom Tillison of the Tea Party Patriots Live radio show and the Orlando Tea Party, had quite a lively discussion with Alan afterwards for 10 minutes. Tillison said, “I let him know that he’s a congressman and he needs to act like one. I reminded him that these are his constinuents.” Tillison asked Grayson, “Don’t you feel that you at least owe them an explanation for your recent votes?”, to which Alan replied, “I don’t owe them anything, they’re trying to defeat me.”

Tillison followed, “You are a U.S. Congressman and you approach these people acting like a thug.”….to which Grayson responded that he was “being attacked.”

When Tillison reminded Congressman Alan Grayson that these are the people who pay your salary, Grayson said, “There are 308 million people that pay my salary. Do you know what that breaks down to per person?” After Tom shrugged his shoulders insinuating ‘I don’t know’, Grayson repeatd the question with emphasis. Tom quickly replied, “I have no idea, Alan, why don’t you tell me”. “It’s pennies on the dollar”, said Grayson. He later said, “I took a pay cut when I took this job”.

Grayson threatened Falconer by saying that he’ll spend thousands of dollars making sure he doesn’t get elected. Question: Is it legal or atleast unethical for a sitting congressman to threaten to influence a local election? Why is Matt Falconer, running for local Mayor, even on the radar of Alan Grayson?

“On Thursday April 8th I was attending a meeting of the Orange County Republican Executive Committee at a Perkins Family Restaurant in Windermere. About 30 Republicans were meeting when Democratic Congressman Alan Grayson barged into our meeting ranting about how we put spies into an Organizing for America meeting.

As I was sitting with Orange County Republican Chairman Lew Oliver, I stood up to Grayson and demand he apologize to Lew for the vial comments he made recently (Grayson said “Lew Oliver could not find a $20 bill if it was stuck in his A**”). Grayson yelled at me for interrupting him when I reminded Grayson he was interrupting our meeting.

The conflict was caught on video showing Alan Grayson, a U.S. Congressman, standing in the middle of a family restaurant screaming at his constituents. Politics aside, I do not think the man has the emotional stability or integrity to represent us in the U.S. Congress.

Grayson pledged to use his own personal funds to defeat me in my race for Orange County Mayor (supporting his Democratic friend Bill Segal). He then told me to get my “a** out of his face.”

I am in awe of the lack of respect he showed for the customers of this restaurant and his constituents.”

Fortunately, one of the attendees grabbed their phone and recorded Alan Grayson displaying his class to his constituents.

In another video, Alan Grayson (at 3:00 in the video) challenged the female recording the video and abruptly leaves.

Question to be answered: How did Alan Grayson hear about the meeting?